For those who live in NYC, consider attending this traditional Pontifical Requiem Mass organized by the Confraternity of the Sacred Heart:
*******
REQUIEM ÆTERNAM DONA EIS, DOMINE... 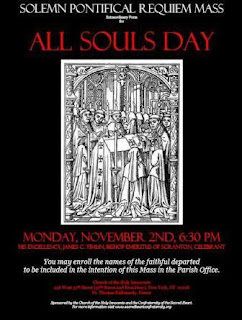 *There will be Solemn Pontifical Requiem Mass at the faldstool for All Souls' Day in New York City at the Church of the Holy Innocents (37th St. and Broadway) on Monday, November 2nd at 6:30 PM.

*The choir will sing Victoria's Requiem for six voices.

*After Mass, there will be the Rite of Absolution at the catafalque.

*This Mass will be the first Pontifical Requiem Mass in New York City since the Council. We all thought that maybe Cardinal Spellman's funeral might have been the last. But, interestingly, Cardinal Spellman's 1967 funeral was already entirely in English, the con-celebrants wore purple and the Dies Iræ Sequence was omitted. It provoked some controversy at the time.

*Tapers will be distributed during the Mass to those in the Sanctuary as well as to the congregation. This will be done with the intention to revive the custom that Stehle-Rettger (Manual of Episcopal Ceremonies) and Jeffrey Collins (The Roman Catholic Ceremonial) mention in their books on the Rubrics of the Mass:

Lighted wax candles may be held by the clergy during the Gospel, from the Sanctus to the Communion inclusively, and at the Absolution. (Manual of Episcopal Ceremonies, Vol I).

The clergy in choir may hold lighted candles during the singing of the Gospel, from the Sanctus to the Communion (both inclusive), and during the Absolution. If this is done, the acolytes will distribute these candles during the latter part of the Dies Iræ (unless the clergy already have them, as they may for at a funeral); they should light the first few and let the clergy pass the flame among themselves. The candles are to be lighted again in a timely manner for the Sanctus and then once more at the end of Mass. (The Roman Catholic Ceremonial, Vol I). 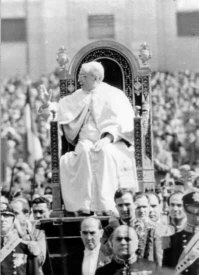