BL. POPE PIUS IX
REIGNED FROM 1846 UNTIL 1878
(32 years!)
“There have been great and illustrious pontificates in the history of the Church, pontificates that stand prominently forth by the personal holiness of the Pope and the great works he accomplished for the Church of God, or the great sufferings he underwent in her defense. These pontificates mark distinct epochs in ecclesiastical history; and with them posterity will range the remarkable reign of Pius IX.
The length of years during which Divine Providence has sustained him in his eminent position; the personal sanctity which breathes forth in all his actions; the zeal with which he has met the spirit of an unbelieving age, that seeks to destroy alike the organization and the faith of the Church; the defining of an article of faith called for by the piety of a world, the convoking of a general council, the heroism and serenity displayed amid the vicissitudes and misfortunes that have chequered his career; exile, spoliation, imprisonment; a great heart afflicted by the sight of the evils visited on those who adhered to him and to the cause of God; all these conspire to invest Pius IX and his pontificate with a halo peculiarly his own.”
~The Life of Pius IX
* 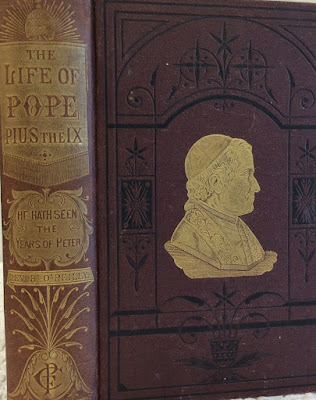 "He hath seen the years of Peter"
* 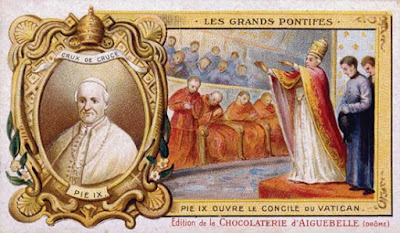 *
“The next morning [of the conclave] he was appointed to open the ballots. As he did so he saw his own name on almost every paper that he unfolded. He could not complete the task. In a voice broken by emotion, he exclaimed: 'Brethren, spare me, take pity on my weakness, I am unworthy.'
The scrutiny completed at last showed that he had received the requisite number of votes. A Pope had been elected before a single ambassador, notified by his sovereign, had approached the window. The scrutators declared his name, the master of ceremonies and the secretary summoned by the junior cardinal deacon entered.
Cardinal Mastai knelt to adore God Who had brought him face to face with an awful responsibility for His own glory. The cardinals, a moment before his equals, withdrew, leaving him alone with God. When he arose, Cardinal Macchi, the subdean, with two others, advanced before him and asked whether he accepted the election. Deeply moved, the newly elected Pope answered that he submitted to the will of God. Then the baldachinos were taken down from above the seats of all the other cardinals, and the cardinals who had sat on either side of him withdrew. When Cardinal Macchi asked him what name he intended to take, the words "Pius IX" were uttered for the first time. ”
~The Life of Pius IX
* 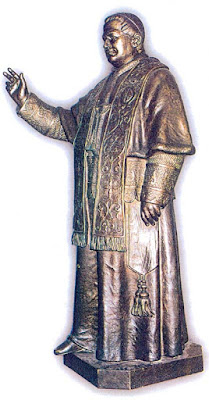 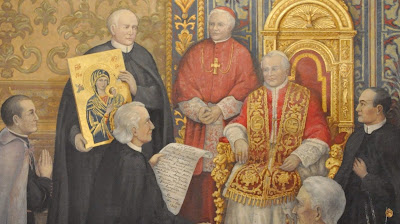 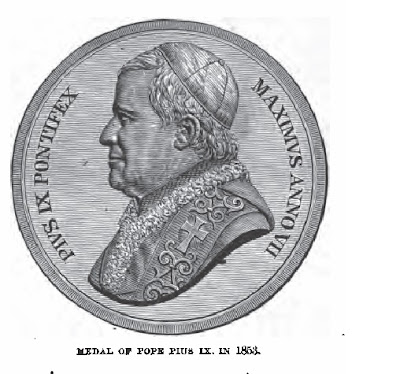 *
“Two cardinal deacons then [after his election] conducted him behind the high altar, where he assumed the pontifical habit, and then in front of the altar he received the homage of the cardinals, and the ring of the fisherman was placed on his hand. After this the first cardinal deacon, while the choir sang Ecce sacerdos magnus, went out on the balcony over the entrance to the palace and proclaimed the election to the people, who had already gathered there.
‘I announce to you a great joy,’ he said. ‘We have as Pope the most eminent and the most Reverend John Mary, Cardinal of the Roman Church, Mastai Ferretti, who has taken the name of Pius IX.’
Loud shouts of joy rose up from the people, the cannon of the castle of St. Angelo thundered forth, the bells of Rome rang out a peal of joy, and a general holiday ensued.”
~The Life of Pius IX
* 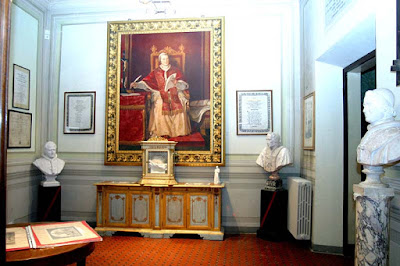 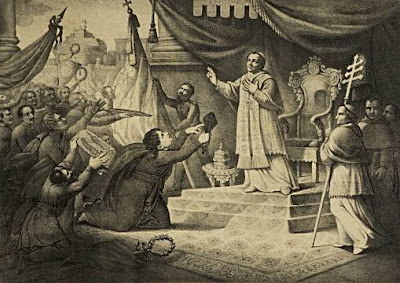 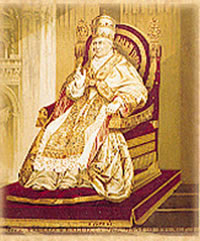 *
"We declare, pronounce, and define that the doctrine which holds that the Blessed Virgin Mary, at the first instant of her conception, by a singular privilege and grace of Almighty God, in virtue of the merits of Jesus Christ, the Saviour of mankind, was preserved immaculate from all stain of original sin, has been revealed by God, and therefore should firmly and constantly be believed by all the faithful. Wherefore, if any shall dare, which God avert, to think otherwise than as it has been defined by us, let them know and understand that they are condemned by their own judgment, that they have suffered shipwreck of the faith, and have revolted from the unity of the Church."
~The Life of Pius IX
* 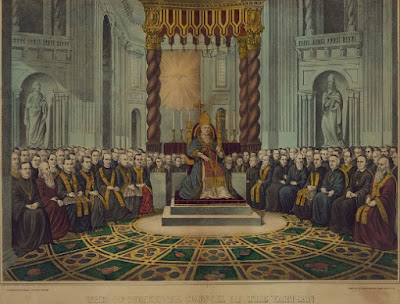 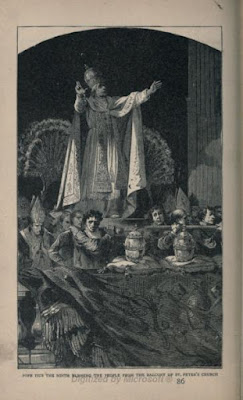 Pius IX giving the Papal Blessing from the balcony, which he stopped doing after the sacrilegious theft of the Patrimony of St. Peter (a.k.a. the Papal States) when he declared himself a "prisoner" in the Vatican.
* 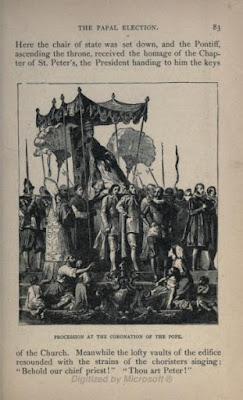 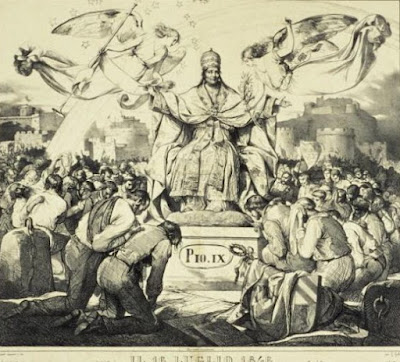 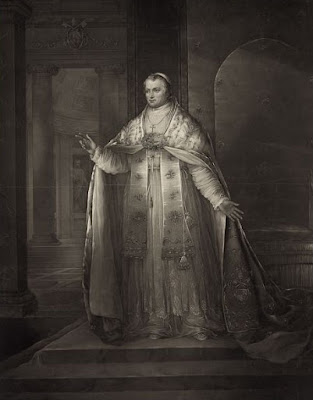 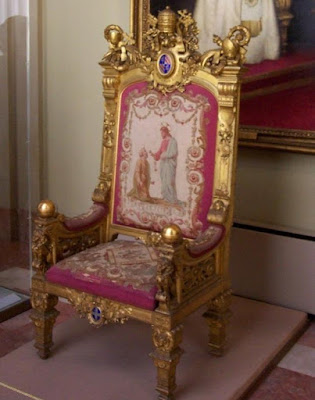 Chair given to Pius IX (his coat of arms can be seen at the top, a little below the papal tiara). The main depiction is of Our Lord Jesus Christ handing the keys of the kingdom to St. Peter.
* 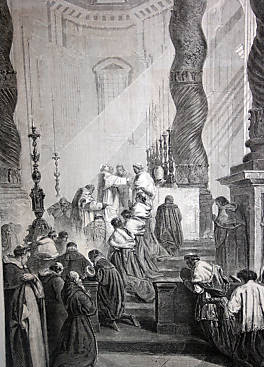 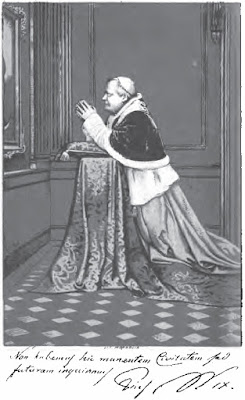 Pius IX in prayer -- one of the most popular depictions of this truly merciful, humble, and holy Pope.
* 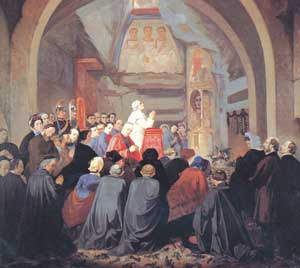 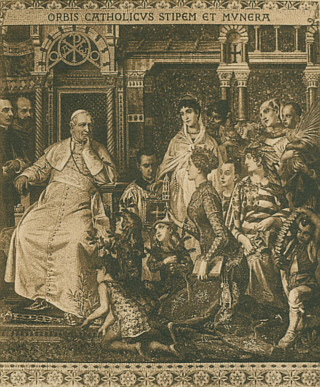 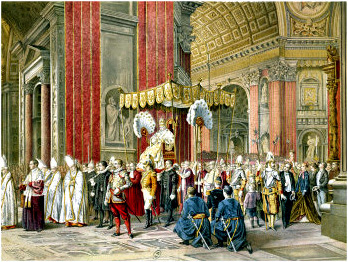 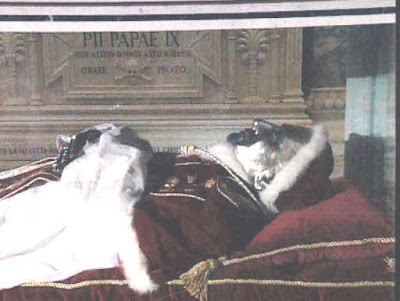 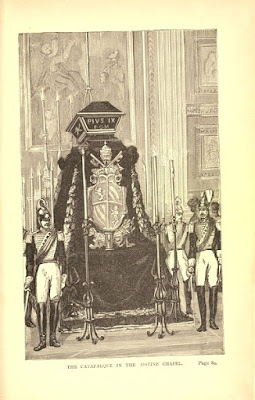 Obsequies for Pius IX
*
“To the Clergy and People of Rome:
Raphael, of the title of Santa Croce in Gerusalemme, Cardinal-Priest of the Holy Roman Church, Monaco la Valetta, Vicar-General, Judge Ordinary of Rome and its districts, and Abbot Commendatory of Subiaco.

The majesty of the omnipotent God has recalled to himself the sovereign pontiff Pius IX, of blessed memory, according to the sad news just imparted to us by the most eminent Camerlengo of the Holy Roman Church, to whom it belongs to make known to the public the death of the Roman pontiffs. At such an announcement, the Catholic people in every part of the world, devoted to the great and apostolic virtues of the immortal pontiff and his sovereign magnanimity, will weep. But, above all, are we most supremely sorrowful; we, O Romans! Since today has unhappily terminated the most extraordinary and glorious pontificate which God has ever conceded to his vicars upon earth.
His life as pontiff and as sovereign was a series of widespread benefits as well in the spiritual as in the temporal order, diffused over all the churches and nations, and in a most particular manner upon his Rome, where at every step monuments of the munificence of the lamented pontiff and father are met with.
In accordance with the sacred canons, in all the cities and important places solemn obsequies and suffrages for the soul of the departed pontiff should be made until the Holy Apostolic See be provided with a new head, and prayers should be made to the Divine Majesty for the speedy election of a successor to the deceased, whom we can never sufficiently lament."
Given from our residence, the 7th of February, 1878.
R. Card. Monaco, Vicar
Placido can. Petacci, Secretary
* 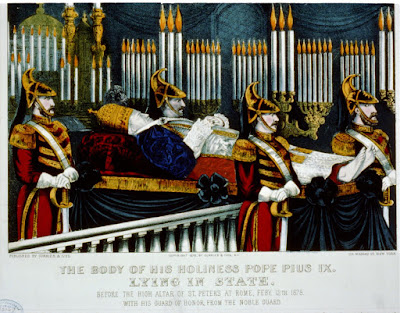 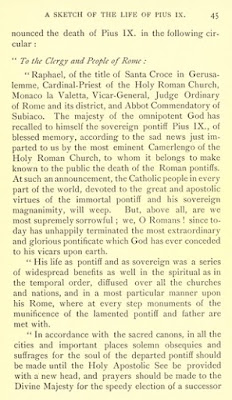 “So far as ceremonial was concerned, nothing could be more gorgeous than the services at St. Peter’s as conducted by Pope Pius IX. For such duties no one could be better fitted; for he was handsome, kindly, and dignified, with a beautiful, ringing voice… At the close of the service, the Pope, being borne on his throne by Roman nobles, surrounded by Cardinals and Princes, and wearing the triple crown, gave his blessing to the city and to the world. There must have been over ten thousands of us in the piazza to receive it, and no one could have performed his part more perfectly.”
~Andrew Dickson White