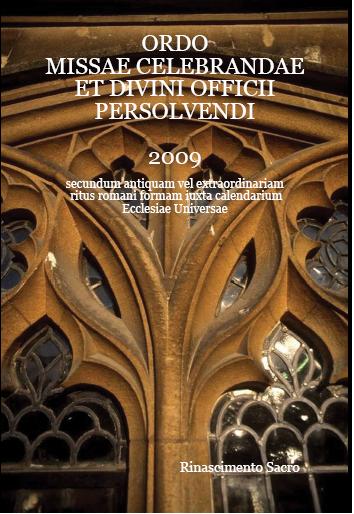 It is with much pleasure that I present to the readers of this blog the following information regarding the Universal Liturgical Calendar for the year 2009.
†††††††
This (traditional) Ordo was composed by Daniele di Sorco (23 y.o., from Livorno, Italy). For as long as I have known him, he has always shown a very sincere and useful interest in the traditional Mass with all Its Rubrics. I remind the readers also that it was this Daniele di Sorco who collaborated with two other young men to write the book titled Introibo ad Altare Dei (go here). He also has a very strong interest in Catholic exegesis, in the official languge of the Church, and many other things that concern the liturgical life of the Catholic Church, particularly when they pertain to the Liturgy in Its traditional and immemorial form.
***
You may obtain this 2009 Ordo as a Book download (a very clear PDF file) for $6.73 or as a hardcover book (219 pages) for $20.23 through Lulu.com.
***
WHAT IS THE MISSÆ CELEBRANDÆ?

It’s the work that presents in details the calendar of the liturgical year. Perfectly in conformity with the dispositions of Summórum Pontíficum, this Ordo Missæ celebrandæ published by Rinascimento Sacro is under the care of one of the authors of Introibo ad Altare Dei and it provides an indispensable guide for all the churches and chapels where the Extraordinary Form of the Roman Rite is celebrated, as well as for all the priests and faithful who, in public or in private, intend to pray the traditional Roman Breviary.

1) An ample introductory section supplied with charts, sketches, rubrics, rules concerning the tones of voice and the singing for the different types of Mass [Low, sung or Solemn], pastoral indications regarding the participation of the faithful, documents from the Sacred Congregation of Rites, instructions on the celebration of Votive and Requiem Masses and much more.

2) The complete liturgical directory for the year 2009, according to the Universal Roman Calendar with precise and detailed instructions, day by day, on the recitation of the Breviary and the Martyrology and on the celebration of Holy Mass.

3) An appendix with the prayers to be recited, as prescribed by the Rubrics, on some days of the Liturgical year (Novemdiale of the Holy Ghost, Act of Consecration to the Sacred Heart of Jesus, prayer to St. Joseph, Act of reparation to Christ the King).
***
This Ordo also provides:
*A chart with a list of Votive Masses (and their rank/class).
*A list of movable feasts for the year 2009.
* A useful chart for the classes of feasts of the Church.
* A clear explanation of Commemorations and when they are to be made.
* Decrees by the Sacred Congregation of Rites pertaining to the Mass and the Divine Office.
* The importance of using the Roman pronunciation of Latin during the Mass and all Liturgical functions.
*Much more.
Posted by latinmass1983 at 8:23 PM 3 comments:

A new group founded in NYC!!! 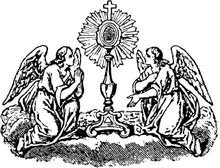 A new group that promotes the Usus Antiquior has been founded in NYC.

For more information, please see their (new) blog: www.aeternumdonum.blogspot.com
Posted by latinmass1983 at 10:22 PM No comments: