Feast of Corpus Christi - Thursday, May 31 at 6PM 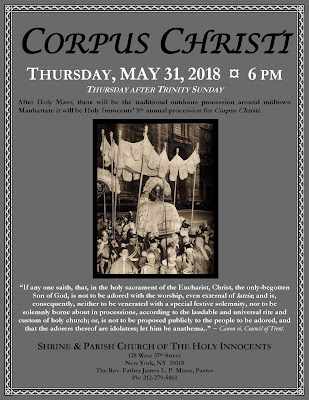 
THURSDAY, MAY 31 – SOLEMN MASS FOR THE FEAST OF CORPUS CHRISTI:

As is tradition, on Thursday, May 31, 2018, at 6PM, there will be a Solemn Mass to celebrate the Feast of Corpus Christi - on its traditional day.

Immediately following the Mass, there will be an outdoor Procession (with triple Benediction) around midtown Manhattan. This year will be Holy Innocents’ 9th annual outdoor Blessed Sacrament Procession for this traditional celebration.

Newly ordained Fr. Leo Joseph Camurati will be the Celebrant of this Solemn Mass. At the end of the Mass and Procession, Fr. Leo Joseph will confer his priestly blessing.
Posted by latinmass1983 at 2:59 PM No comments: 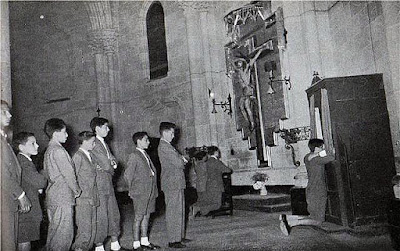 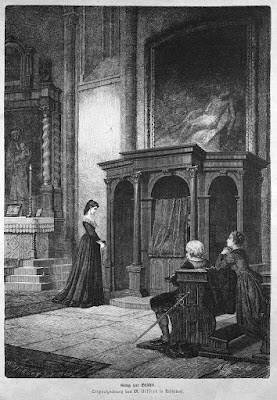 The great number of penitents waiting to be heard does not excuse the confessor from the obligation of admonishing, correcting and disposing them, so that the reception of the Sacrament of Penance may be of benefit to them. St. Francis Xavier was accustomed to say that it was better to hear a few confessions, and to hear them well, than to hear a great many and to only half hear them. And St. Alfonsus says that it matters little whether there be others waiting to confess or whether some will be obliged to depart without being heard; for on the day of judgment the confessor will have to render an account of those he actually heard, and not of the others.
“Parum refert, quod alii expectant aut inconfessi discedant; confessarius enim de hoc tantum, qui sibi nunc confitetur, non vero de aliis, in die judicii rationem reddere debet” (Praxis confess. n.7).
Again it is quite blameworthy that the confessor, on the eves of great festivals, when the number of confessions is very great, should permit the penitent to confess only one or two sins and then absolve him, with the admonition to confess his other sins in his next confession. It is expressly stated in all moral theologies that the number of penitents desiring to be heard in confession can never be a valid or just reason for making only a partial confession, even though many must depart unheard and unshriven.
Under all such circumstances, a full and integral confession of all mortal sins is required of the penitent, sub gravi. The practice of absolving penitents without permitting them to confess all their mortal sins, because otherwise many must depart without absolution, is expressly condemned by Pope Innocent XI, in the 59th proscribed proposition.
“Licet sacramentaliter absolvere, dimidiate tantum confessos, ratione magni concursus penitentium, qualis v. g. potest contingere in die magnae alicujus festivitatis vel indulgentiæ.”
The reason why this proposition was condemned, says Billuart, is that the harm done by sending some penitents away unheard is not so great, as to justify a partial confession, especially when there is danger of absolving the unworthy, by reason of the precipitation with which the confessions are heard and the omission of a part of one’s sins.
~The Casuist, Volume II, 1908.
Posted by latinmass1983 at 12:02 PM No comments: