ANNIVERSARY OF THE DEATH OF BL. POPE PIUS IX 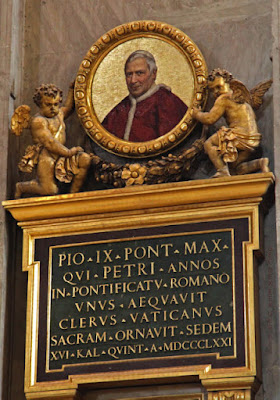 Today marks the anniversary of the death of Bl. Pope Pius IX, who reigned as Supreme Pontiff of the Catholic Church for 32 years – from 1846 to 1878. It is very difficult to visit the Eternal City and not see a bust, a statue, a coat of arms, a painting or a portrait of this magnificent Pope who gloriously filled the Chair of Peter during extremely turbulent and violent times.


During his pontificate, he drew the line of demarcation between the Church of God and the world of Satan, between what was Catholic and what was anti-Catholic. Immediately after his election in 1846, Pius IX became Rome’s chief object of attraction. He became the most popular and esteemed Pope, especially during the long years of suffering, for which the very prophetically apt title of “CRUX DE CRUCE” was chosen for him. 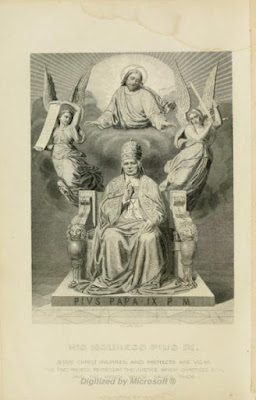 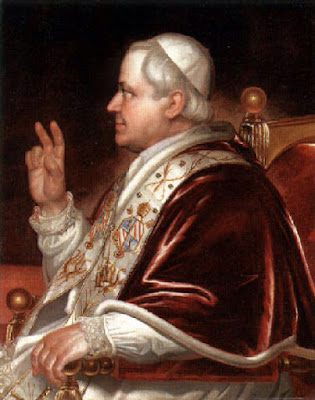 “So far as ceremonial was concerned, nothing could be more gorgeous than the services at St. Peter’s as conducted by Pope Pius IX. For such duties no one could be better fitted; for he was handsome, kindly, and dignified, with a beautiful, singing voice… At the close of the service, the Pope, being borne on his throne by Roman nobles, surrounded by Cardinals and Princes, and wearing the triple crown, gave his blessing to the city and to the world. There must have been over ten thousands of us in the piazza to receive it, and no one could have performed his part more perfectly.” 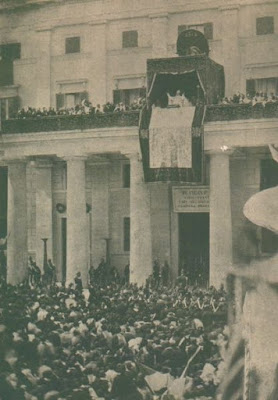 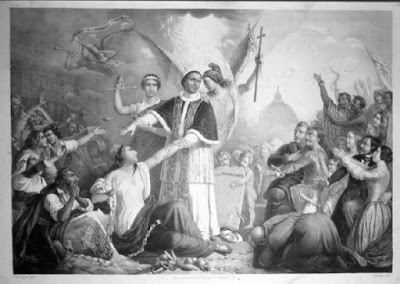 His works of charity were well-known during his lifetime. His person (and his pontificate) added to the glory of Rome – that seat of the universal empire that conquered and transformed much of the known world in all aspects. Rome was made even greater and more glorious when Pius reigned in Rome. The Eternal City, baptized in the blood of the martyrs and made stronger through persecution, became more celebrated under the reign of Pope Pius IX, the father of Christendom. 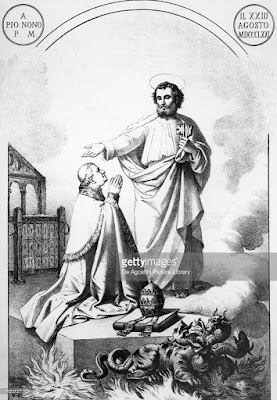 “I have seen many pious priests in the performance of their sacred functions; but never before did I behold a countenance more intensely expressive of piety, or so illumined with the heavenly brightness which outwardly manifests the working of the spirit within. It seemed as if it were suffused with a light from above. Heart, and mind, and soul appeared to be absorbed, as they really were, in the sacred ceremonies in which he assisted; and not for a second's space did his attention wander from his devotions. He communed as truly with his God in the midst of that splendid crowd, and with hundreds of eager eyes riveted upon him, as if he were kneeling in his private chamber, and asking for another day of strength to meet the difficulties of his exalted but perilous position.” 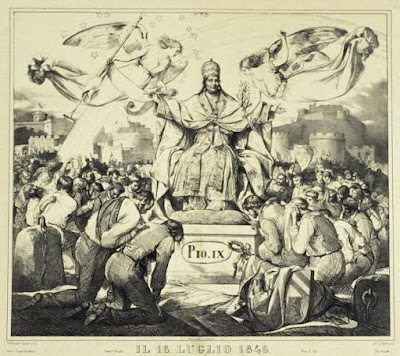 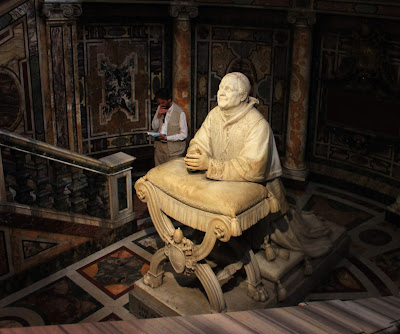 “There have been great and illustrious pontificates in the history of the Church, pontificates that stand prominently forth by the personal holiness of the Pope and the great works he accomplished for the Church of God, or the great sufferings he underwent in her defense. These pontificates mark distinct epochs in ecclesiastical history; and with them posterity will range the remarkable reign of Pius IX.
The length of years during which Divine Providence has sustained him in his eminent position; the personal sanctity which breathes forth in all his actions; the zeal with which he has met the spirit of an unbelieving age, that seeks to destroy alike the organization and the faith of the Church; the defining of an article of faith called for by the piety of a world, the convoking of a general council, the heroism and serenity displayed amid the vicissitudes and misfortunes that have chequered his career; exile, spoliation, imprisonment; a great heart afflicted by the sight of the evils visited on those who adhered to him and to the cause of God; all these conspire to invest Pius IX and his pontificate with a halo peculiarly his own.”
~The Life of Pius IX 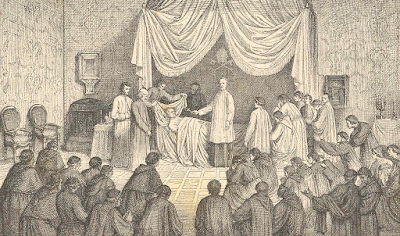 “To the Clergy and People of Rome:

The majesty of the omnipotent God has recalled to himself the sovereign pontiff Pius IX, of blessed memory, according to the sad news just imparted to us by the most eminent Camerlengo of the Holy Roman Church, to whom it belongs to make known to the public the death of the Roman pontiffs.
At such an announcement, the Catholic people in every part of the world, devoted to the great and apostolic virtues of the immortal pontiff and his sovereign magnanimity, will weep. But, above all, are we most supremely sorrowful; we, O Romans! Since today has unhappily terminated the most extraordinary and glorious pontificate which God has ever conceded to his vicars upon earth.
His life as pontiff and as sovereign was a series of widespread benefits as well in the spiritual as in the temporal order, diffused over all the churches and nations, and in a most particular manner upon his Rome, where at every step monuments of the munificence of the lamented pontiff and father are met with.
In accordance with the sacred canons, in all the cities and important places solemn obsequies and suffrages for the soul of the departed pontiff should be made until the Holy Apostolic See be provided with a new head, and prayers should be made to the Divine Majesty for the speedy election of a successor to the deceased, whom we can never sufficiently lament.”
Given from our residence, the 7th of February, 1878. 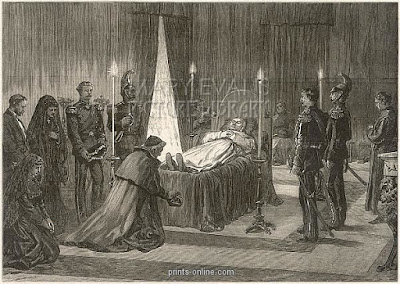