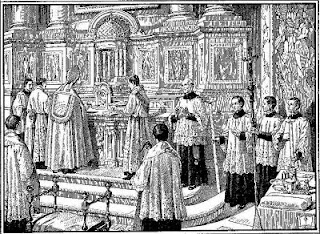 *
His Eminence Edward Card. Egan, Archbishop Emeritus of New York, accepted the invitation from the Agnus Dei Council of the Knights of Columbus in New York City to celebrate a Solemn Pontifical Mass in the Extraordinary Form of the Roman Rite – a Mass for Life – on 25 March 2010, the Feast of the Annunciation. The Council’s annual Mass for Life emphasizes the special link between the Incarnation of Jesus from the moment of conception in the womb at the Annunciation and Catholic Pro-Life Values. More information about the location and time of the Mass will be released shortly.
* 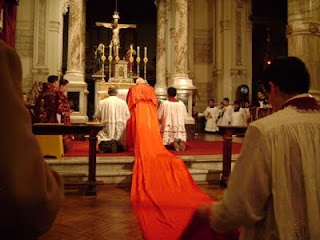 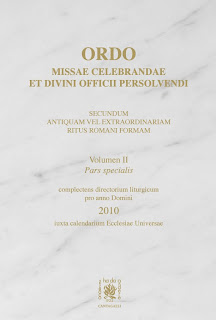 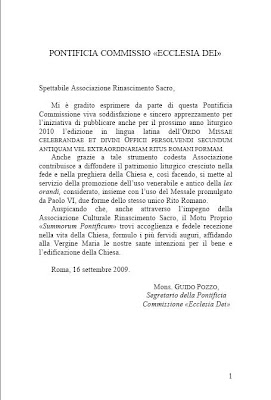 This Ordo is a complete guide for the entire year to the celebration of the traditional Mass. Written by Daniele Di Sorco, the Ordo conforms fully to the regulations of Summorum Pontificum and is an indispensable addition to all churches and chapels where Holy Mass is celebrated according to the 1962 Roman Missal. It would also make a great gift for all priests, religious and faithful who, in private or in public, recite the traditional Roman Breviary.

The Ordo has been divided into two volumes in order to make it easier to consult and to make it less expensive. In fact, the first volume, which contains the general guidelines for the celebration of Mass and the recitation of the Office, can be purchased once and for all, while the second volume, which contains the liturgical outline for the year in progress, has to be republished every year. Only for this year the two volumes are sold together.

The first volume has:

2) The rules on fasting and abstinence.

3) The tables of precedence, occurrence and concurrence.

4) Ample indications on how to organize the various parts of the Divine Office and of the Mass depending on the liturgical day.

5) A very helpful and concise set of norms that regulate the tones of voice used for the different types of Mass (Low, Sung, Solemn).

6) An excerpt from the Instructio de Musica sacra et sacra Liturgia, which deals with active participation of the faithful at Holy Mass.

7) Tables and guidelines on the celebration of 4th Class Votive Masses. 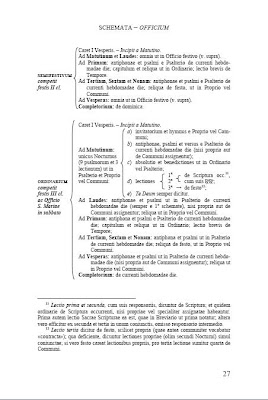 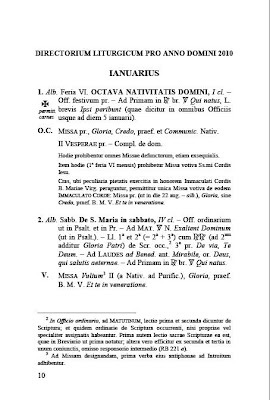 The second volume has:

1) The table of movable days.

2) The complete liturgical directory for the current year according to the universal Roman calendar with precise and detailed instructions for the recitation of the Breviary and the celebration of the Mass.

The use of the Latin language makes this Ordo accessible even for those who do not have a deep knowledge of this language and allows many other Catholics of the world to use it.

The Ordo may be obtained at any bookstore (in Italy). The ISBN number of the two indivisible volumes is 978-88-8272-514-3. It may also be purchased directly from the sito della casa editrice Cantagalli.

Starting next year, the second volume (relative to 2011) will be available separately.
Posted by latinmass1983 at 1:06 AM No comments: