On November 3rd, 2014, the Church of the Holy Innocents in midtown Manhattan (NYC) will be observing the Commemoration of All Souls' Day with a traditional Solemn Mass at 6pm.

Fr. Carlos Viego will be the Celebrant of the Mass.

Tapers will be distributed to be held at the Gospel, during the Canon, and for the Rite of Absolution. 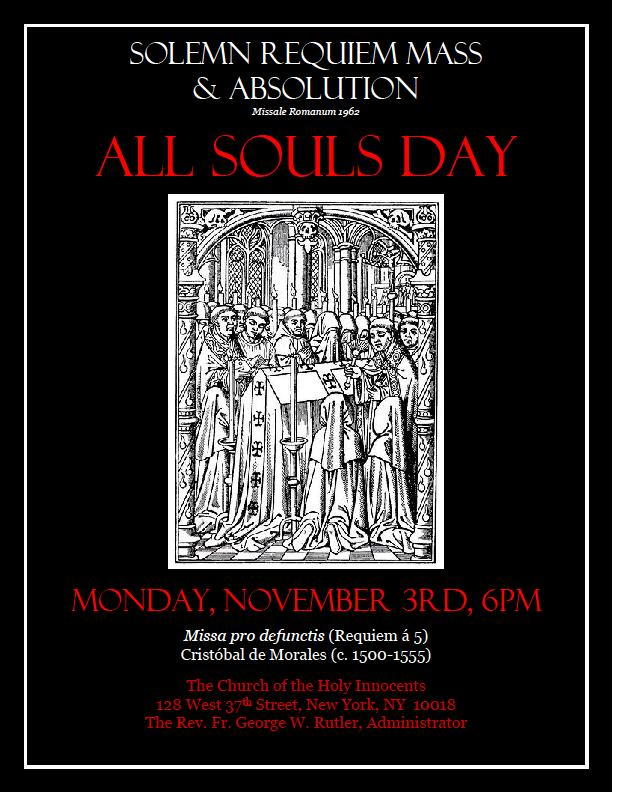 
RESPECT for the dead is not an exclusively Christian sentiment … But it is Christianity that has strengthened, transformed and elevated these deep-seated sentiments of our common nature. They are no longer vague and uncertain; they are sustained and sanctioned by revealed truth and, in particular, they rest upon the central dogma of our faith, the resurrection of the dead. The dead body will come to life again. Nay, it is not dead, but sleepeth. It is only buried—typically, no less than really, laid in a narrow “cell,” in a place of “rest,” “in a hostelry,” to await the angel’s trumpet call at the end of time.

Catholic teaching regarding prayers for the dead is bound up inseparably with the doctrine of Purgatory and the more general doctrine of the Communion of the Caints, which is an article of the Apostle's Creed. The Council of Trent (Sess. XXV) defined, “purgatory exists, and the souls detained therein are helped by the suffrages of the faithful, but especially by the acceptable sacrifice of the altar.”
Before the death of Christ, to die was seemingly to fall into nothingness, or, at least, to lose the body for ever, the spirit to grope its way through shadows of the unknown. Christ expelled those shadows with His light, and because good Christians now belong to Christ, not to the devil, they are Christ's to live and to die with Him; and therefore, death opens up to them on their departure from this life prospects of unalloyed happiness