***
The “Professio fidei Tridentina,” also known as the “Creed of Pope Pius IV,” is one of the four authoritative Creeds of the Catholic Church. It was issued on November 13, 1565 by Pope Pius IV in his bull “Injunctum nobis” under the auspices of the Council of Trent (1545 - 1563). It was subsequently modified slightly after the First Vatican Council (1869 - 1870) to bring it in line with the dogmatic definitions of the Council. The major intent of the Creed was to clearly define the Catholic faith against Protestantism. At one time it was used by Theologians as an oath of loyalty to the Church and to reconcile converts to the Church, but it is rarely used these days. 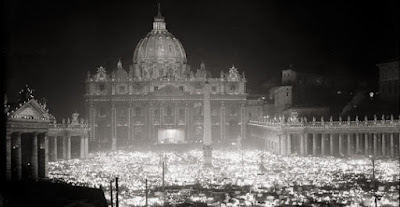 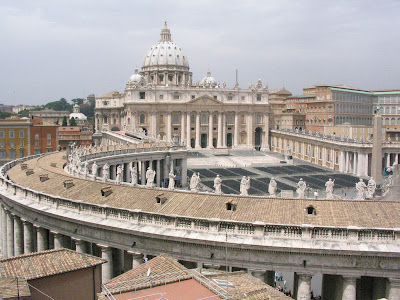 I, N., with firm faith believe and profess all and everything which is contained in the creed of faith, which the Holy Roman Church uses, namely: I believe in one God the Father Almighty, Creator of heaven and earth, of all things visible and invisible; and in one Lord Jesus Christ, the Only-begotten Son of God, and born of the Father before all ages, God of God, Light of Light, True God of True God, begotten not made, consubstantial with the Father, by whom all things were made; who for us men and for our salvation descended from heaven, and became incarnate by the Holy Spirit of the Virgin Mary, and was made man; He was also crucified for us under Pontius Pilate, suffered and was buried; and He rose on the third day according to the Scriptures, and ascended into heaven; He sitteth at the right hand of the Father, and will come again with glory to judge the living and the dead, of whose kingdom there shall be no end; and in the Holy Spirit, the Lord and giver of life, who proceeds from the Father and the Son; who together with the Father and the Son is adored and glorified; who spoke through the prophets; and in one Holy Catholic and Apostolic Church. I confess one baptism for the remission of sins, and I await the resurrection of the dead, and the life of the world to come. Amen. 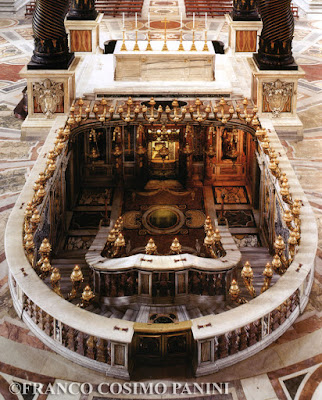 Altar of the "Confessio" of St. Peter at St. Peter's Basilica
*

The Apostolic and Ecclesiastical Traditions and all other observances and constitutions of that same Church I most firmly admit and embrace. I likewise accept Holy Scripture according to that sense which our Holy Mother Church has held and does hold, whose [office] it is to judge of the true meaning and interpretation of the Sacred Scriptures; I shall never accept nor interpret it otherwise than in accordance with the unanimous consent of the Fathers.

I also profess that there are truly and properly seven Sacraments of the New Law instituted by Jesus Christ our Lord, and necessary for the salvation of mankind, although not all are necessary for each individual; these sacraments are Baptism, Confirmation, the Eucharist, Penance, Extreme Unction, Order, and Matrimony; and [I profess] that they confer grace, and that of these Baptism, Confirmation, and Order cannot be repeated without sacrilege. I also receive and admit the accepted and approved rites of the Catholic Church in the solemn administration of all the aforesaid Sacraments. I embrace and accept each and everything that has been defined and declared by the Holy Synod of Trent concerning original sin and justification. 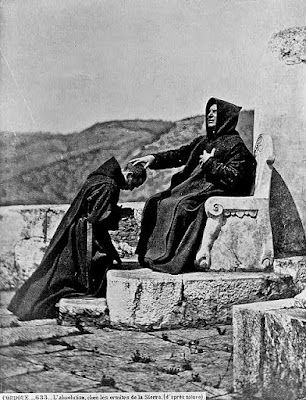 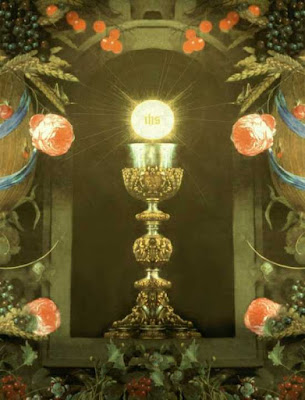 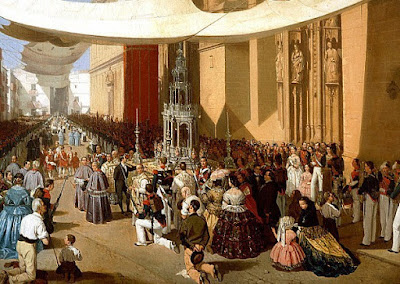 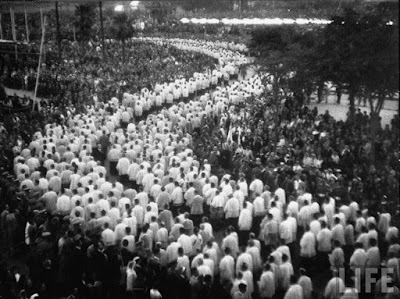 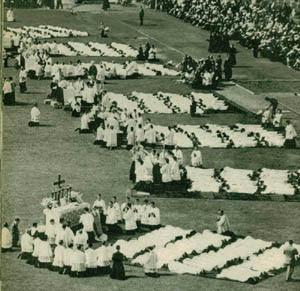 Ordinations to the Priesthood in Spain after the end of the Civil War
*
I also profess that in the Mass there is offered to God a true, proper sacrifice of propitiation for the living and the dead, and that in the most Holy Sacrament of the Eucharist there is truly, really, and substantially present the Body and Blood together with the Soul and the Divinity of our Lord Jesus Christ, and that there takes place a conversion of the whole substance of bread into the Body, and of the whole substance of the wine into the Blood; and this conversion the Catholic Church calls Transubstantiation. I also acknowledge that under one species alone the whole and entire Christ and the true Sacrament are taken.

I steadfastly hold that a purgatory exists, and that the souls there detained are aided by the prayers of the faithful; likewise that the Saints reigning together with Christ should be venerated and invoked, and that they offer prayers to God for us, and that their relics should be venerated. I firmly assert that the images of Christ and of the Mother of God ever Virgin, and also of the other Saints should be kept and retained, and that due honor and veneration should be paid to them; I also affirm that the power of indulgences has been left in the Church by Christ, and that the use of them is especially salutary for the Christian people. 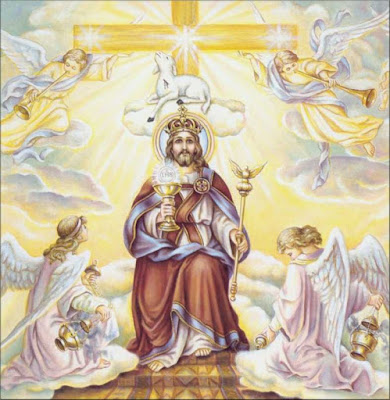 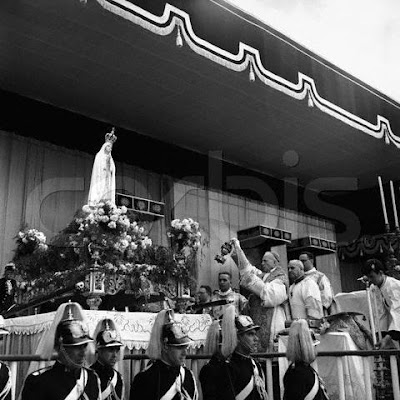 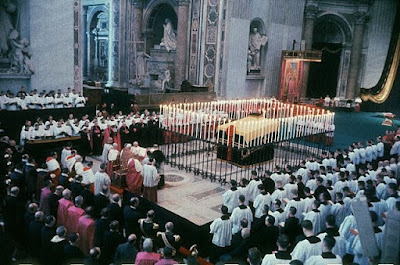 Traditional funeral of a Cardinal of the Roman Church
*
I acknowledge the Holy Catholic and Apostolic Roman Church as the Mother and Teacher of all churches; and to the Roman Pontiff, the successor of the blessed Peter, chief of the Apostles and Vicar of Jesus Christ, I promise and swear true obedience. Bl. Pope Pius IX
*
Also all other things taught, defined, and declared by the sacred canons and ecumenical Councils, and especially by the sacred and holy Synod of Trent, [and by the ecumenical Council of the Vatican, particularly concerning the primacy of the Roman Pontiff and his infallible teaching], I without hesitation accept and profess; and at the same time all things contrary thereto, and whatever heresies have been condemned, and rejected, and anathematized by the Church, I likewise condemn, reject, and anathematize.
* 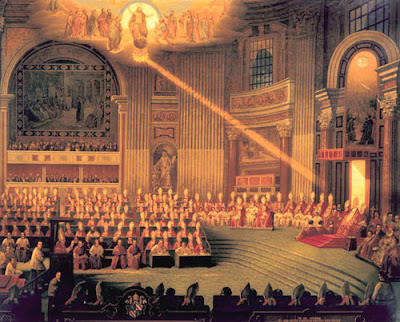 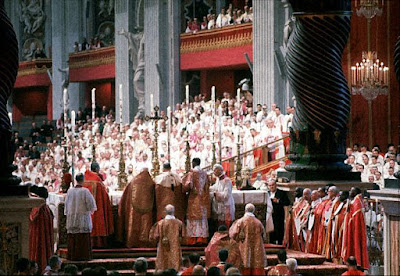 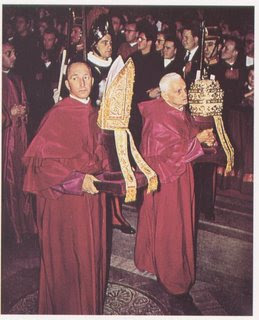 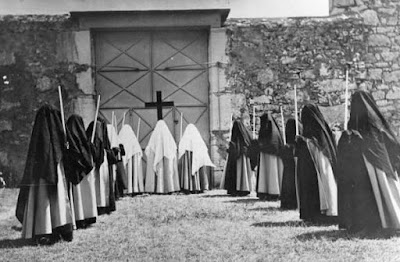 Carmelite Nuns in prayer and in procession
* 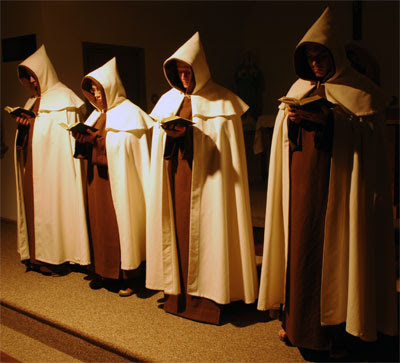 Carmelite Monks praying the Divine Office
*
This true Catholic faith, outside of which no one can be saved, (and) which of my own accord I now profess and truly hold, I, N., do promise, vow, and swear that I will, with the help of God, most faithfully retain and profess the same to the last breath of life as pure and inviolable, and that I will take care as far as lies in my power that it be held, taught, and preached by my subjects or by those over whom by virtue of my office I have charge, so help me God, and these holy Gospels of God.
* 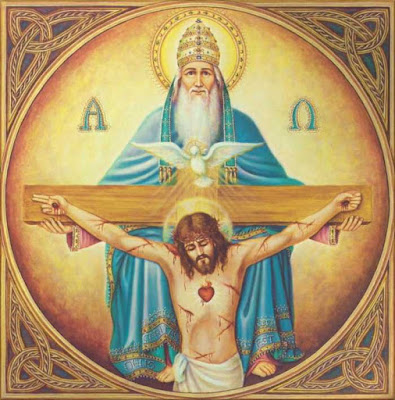 It does not say invisible for us baptism of desire(BOD), baptism of blood(BOB) and being saved in invincible ignorance(I.I) are visible exceptions to the dogma extra ecclesiam nulla salus( outside of this Church no one is saved).
It does not state that the Nicene Creed now means, instead of 'I believe in one baptism for the forgiveness of sins', 'I believe in three or more known baptisms for the forgiveness of sins, desire, blood and invincible ignorance and it excludes the baptism of water'.
It does not state that every one needs to enter the Church except for those saved with the BOD, BOB and I.I. These are innovations which have come into the Church after the Fr. Leonard Feeney case when the magisterium made a mistake. The same mistake was repeated in Vatican Council II and then in the Catechism of the Catholic Church.
SEPTEMBER 8, 2017

It doesn't have to state it. Such catechisms, or Symbols as they are sometimes known, are NOT meant to include every single point or detail of a teaching of the Catholic Church. As we can all see, the Nicene Creed and the Apostles' Creed do not do that either, and they were not meant to do it ever, as they are somewhat general summaries of the teachings of the Church.