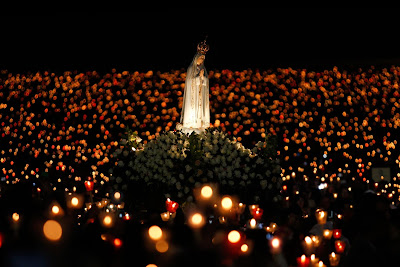 *
“Are you willing to offer yourselves to God to bear all the sufferings He wants to send you, as an act of reparation for the sins by which He is offended, and for the conversion of sinners?”
“Sacrifice yourselves for sinners, and say often to Jesus, especially whenever you make a sacrifice: O Jesus, it is for love of Thee, for the conversion of sinners, and in reparation for the sins committed against the Immaculate Heart of Mary.”
* 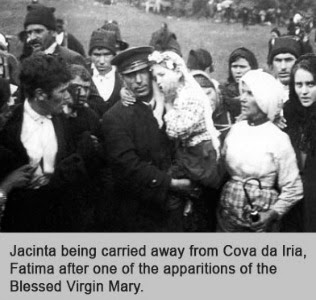 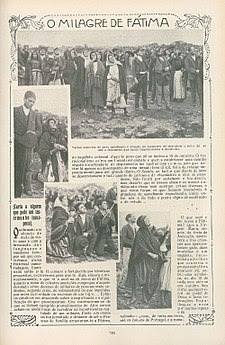 *
“You have seen hell where the souls of poor sinners go. To save them, God wishes to establish in the world devotion to My Immaculate Heart. If what I say to you is done, many souls will be saved and there will be peace. The war is going to end; but if people do not cease offending God, a worse one will break out during the reign of Pius XI. When you see a night illumined by an unknown light, know that this is the great sign given you by God that He is about to punish the world for its crimes by means of war, famine, and persecutions of the Church and of the Holy Father.”

“To prevent this, I shall come to ask for the consecration of Russia to My Immaculate Heart, and the Communion of Reparation on the First Saturdays. If My requests are heeded, Russia will be converted and there will be peace; if not, she will spread her errors throughout the world, causing wars and persecutions of the Church. The good will be martyred, the Holy Father will have much to suffer, various nations will be annihilated. In the end, My Immaculate Heart will triumph. The Holy Father will consecrate Russia to Me, and she will be converted, and a period of peace will be granted to the world.”
* 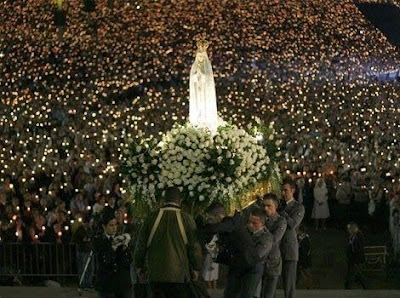 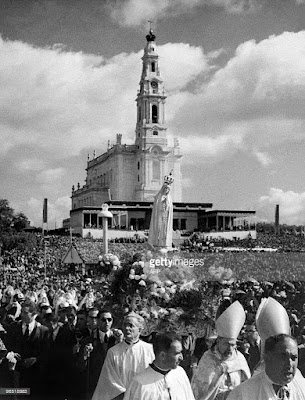 *
“Do not offend the Lord Our God any more, for He is already too much offended!”
* 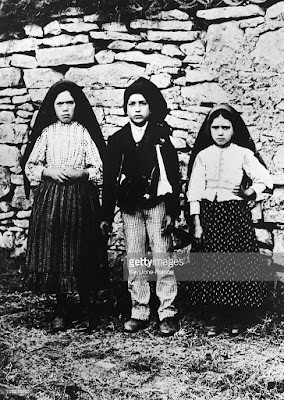 *
A physician, Dr. Almeida Garrett, testified [The Miracle of the Sun]:

Suddenly I heard the uproar of thousands of voices, and I saw the whole multitude spread out in that vast space at my feet turn their backs to that spot where, until then, all their expectations focused, and look at the sun on the other side I turned around, too, toward the point commanding their gazes, and I could see the sun, like a very clear disc, with its sharp edge, which gleamed without hurting the sight. It could not be confused with the sun seen through a fog (there was no fog at that moment), for it was neither veiled, nor dim. At Fatima, it kept its light and heat, and stood out clearly in the sky, with a sharp edge, like a large gaming table. The most astonishing thing was to be able to stare at the solar disc for a long time, brilliant with light and heat, without hurting the eyes, or damaging the retina.
* 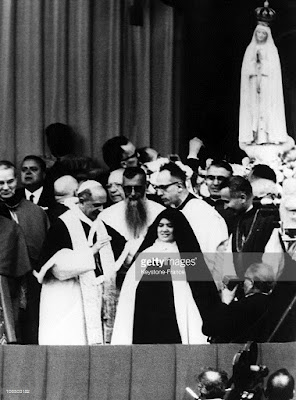 And then we witnessed a unique spectacle, an incredible spectacle, unbelievable if you did not witness it. From above the road we see the immense crowd turn towards the sun, which appeared at its zenith, clear of the clouds. It looked like a plate of dull silver, and it was possible to stare at it without the least discomfort. It did not burn the eyes. It did not blind. One might say that an eclipse had occurred.
* 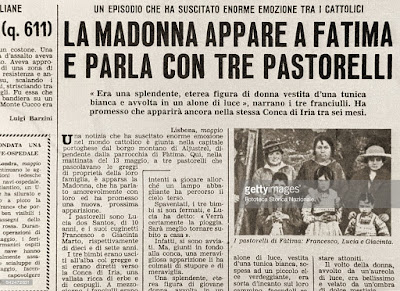 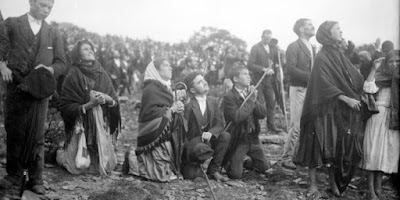 "It shook and trembled; it seemed like a wheel of fire." (Maria da Capelinha)

"The sun turned like a fire wheel, taking on all the colors of the rainbow." (Maria do Carmo)

"The sun took on all the colors of the rainbow. Everything assumed those same colors: our faces, our clothes, the earth itself." (Maria do Carmo).
* 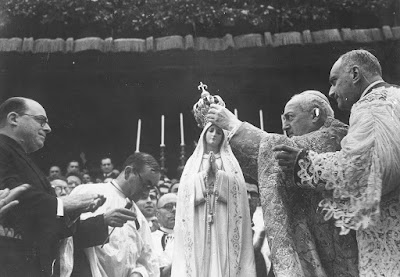 *
The most terrifying aspect of the Miracle of the Sun then took place:

We suddenly heard a clamor, like a cry of anguish of that entire crowd. The sun, in fact, keeping its rapid movement of rotation, seemed to free itself from the firmament and, blood-red, to plunge towards the earth, threatening to crush us with its fiery mass. Those were some terrifying seconds." (Dr. Almeida Garrett)

"The sun began to dance and, at a certain moment, it appeared to detach itself from the firmament and to rush forward on us, like a fire wheel." (Alfredo da Silva Santos)

"Finally, the sun stopped and everybody breathed a sigh of relief …" (Maria da Capelinha)

"From those thousands of mouths I heard shouts of joy and love to the Most Holy Virgin. And then I believed. I had the certainty of not having been the victim of a suggestion. I had seen the sun as I would never see it again." (Mario Godinho, an engineer).
* 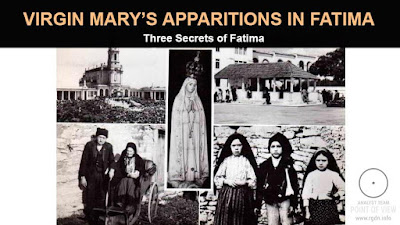 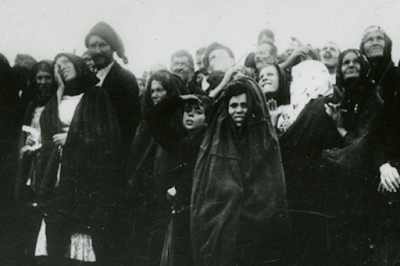 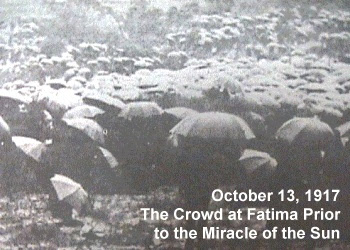 *
Yet another astonishing aspect of the Miracle was that all of the thousands of people, most of whom were soaked to the bone and dirty from the mud, suddenly found that their clothes were dry and clean.

"The moment one would least expect it, our clothes were totally dry." (Maria do Carmo)

"My suit dried in an instant." (John Carreira)
* 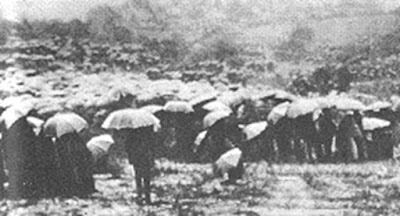 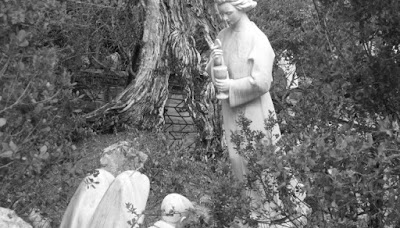 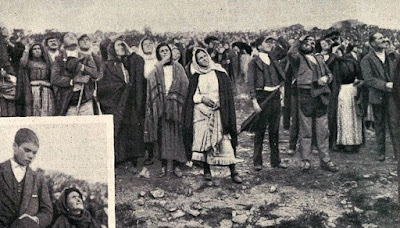 This enormous multitude was drenched, for it had rained unceasingly since dawn. But though this may appear incredible after the great miracle everyone felt comfortable, and found his garments quite dry, a subject of general wonder the truth of this fact has been guaranteed with the greatest sincerity by dozens and dozens of persons of absolute trustworthiness, whom I have known intimately from childhood, and who are still alive (1937), as well as by persons from various districts of the country who were present.
* 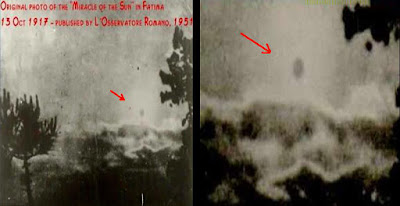 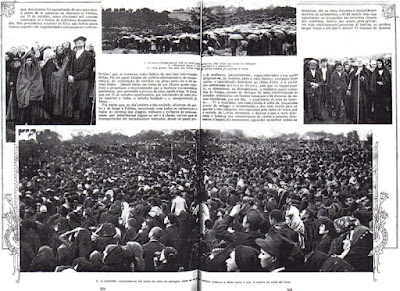 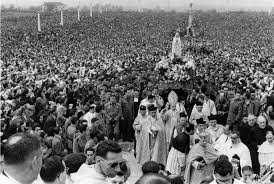 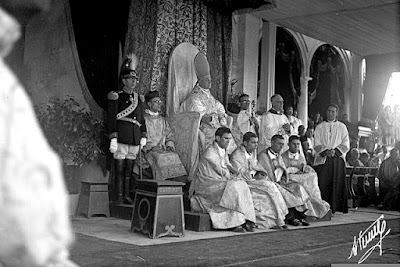 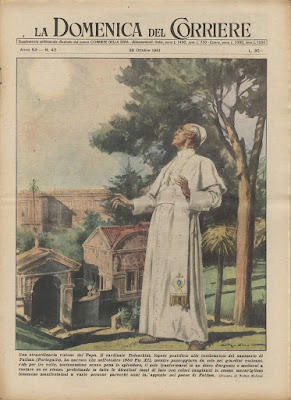