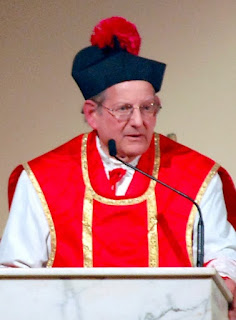 It was with extreme sadness that we learned of the passing of the Rev. Monsignor Joseph Ambrosio on the morning of Sunday, October 4th, 2020 -- an inimitable Monsignor if there ever was one. There were so many qualities that made him an excellent person, a great friend, a faithful Christian, and an exemplary Priest. It can be safely said that, in these days of liturgical chaos, no one outdid him in his zealous dedication for the beauty of the House of God and that it was a great joy to serve Mass when he was the Celebrant.

Not only did he try to rescue liturgical items from closed churches in order to put them to good liturgical use in his own church, but he washed, starched, pressed, and repaired the sacred linens himself, as he believed it was his duty to take care of the Sanctuary and the Tabernacle of which he was made the custodian. Everyone who ever visited his church and attended his Masses will testify that he always wanted the best for the Liturgy: vestments, music, sacred vessels, Relics, ceremonies, all types of liturgical items, etc. Additionally, he very graciously donated many of these things to other communities that did not have what was needed for the reverent and beautiful celebration of the Liturgy.

A truly humble priest, he would most often refer to himself simply as “Fr. Ambrosio,” despite his title of Monsignor as a Chaplain to His Holiness. He would also frequently pray the beautiful Litany of Humility, which he seems to have known from memory and of which he would frequently remind people whenever certain things did not go as planned: “these things make us humble,” he would say.

In addition to his humility, he knew how to provide undeniably generous hospitality: servers, parishioners, priests, Bishops, and Cardinals were witnesses of his great level of generosity whenever they would visit his rectory. In particular, he was well-known for his famous invitations to dinner, which made everybody realize what an excellent cook he was, and he always made sure to provide full entertainment, since he would also sing and play the piano, as well as tell unforgettable stories in a way that he alone knew how – no one ever experienced a dull evening in Msgr. Ambrosio’s rectory! Ite ad Joseph had a different meaning in Newark, N.J.

His love for the Liturgy became much stronger when he began to celebrate the traditional Liturgy of the Roman Church, so much so that he eventually had all the Masses at Mt. Carmel celebrated ad orientem. He would also graciously accept invitations to celebrate the Old Mass in many different places and in particular in New York City at the Church of the Holy Innocents. Many of the parishioners and servers there grew to love and admire him. He frequently said that he loved going to Holy Innocents to celebrate the Old Mass, which for many years he did on his days off (Fridays), and several times he was heard saying: “Whenever I go to Holy Innocents, I feel young.” Once he said this at a dinner table full of servers, priests, and a couple of Bishops.

His passing from this world certainly leaves a tremendous void because people like the good old Monsignor are impossible to replace. May he rest in the eternal Peace of Christ.