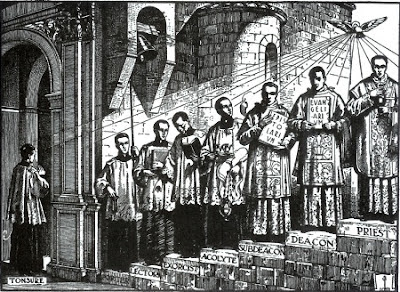 Conformably to the designs of Our Lord, the Church has ordained that there should be for each of them (orders) a particular class of ministers, that some should be established to watch over the holy place, others to instruct the faithful, others to defend them against the devil and withdraw them from his power, still others to prepare the sanctuary and to decorate the altar, etc. Moreover it has been determined that one may arrive at the higher powers only progressively, mounting degree by degree, that each new order be super-added to the preceding orders, and that the lower be dependent on the higher. {Si quis dixerit non esse in Ecclesia ordines et majores et minores, per quos velut per gradus quosdam in sacerdotium tendatur, anathema sit. CONG. TRID., Sess. xxm, can. 2. Ordinis sacramentum est thronus ille eburneus mystici Salomonis, cujus reclinatorium aureum, ad quern ascenditur sex gradibus purpureis, media caritate constratis. PET. BLES}.
* 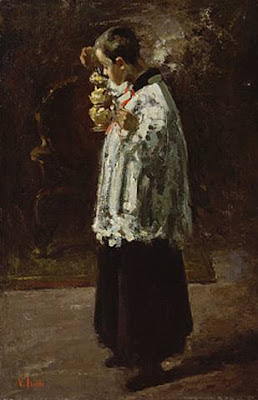 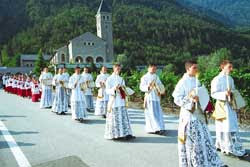 Thus, the pontificate or the plenitude of priestly power which resides in the Bishop, is distributed by ordination into seven distinct orders, the one subordinate to the other: the priesthood, which gives the power to offer and consecrate the Divine Host; the diaconate, charged with its distribution; the subdiaconate, to which belongs the duty of preparing the matter of the sacrifice and the sacred vessels; the order of acolyte, to which belongs the care of the altar and the lights; the order of exorcist, which keeps out the unworthy and frees those possessed; the order of lector, which proclaims the word of God and assists the hearers to penetrate into its spirit; the order of ostiary, which guards the property of the House of God and assembles the faithful.
* 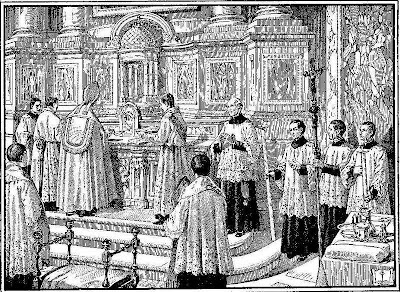 These seven powers successively conferred, beginning with the last, are superimposed one upon the other without ever disappearing or coming in conflict, so that in the priesthood, the highest of them all, they are all found. The priest unites them all in his person and has to exercise them all his life in the various offices of his ministry. They are as the seven columns of the living temple which the Incarnate Wisdom has raised up to the Divine Majesty. {Sapentia sedificavit sibi domum, excidit columnas septem, immolavit victimas suas, miscuit vinum et proposuit mensam suam. PROV., ix, 1}.
Posted by latinmass1983 at 7:28 PM