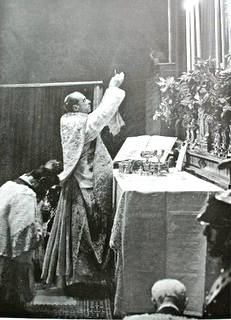 Pope Paul VI forced the New Order of the Mass on the entire Church by means of the Apostolic Constitution Missale Romanum, thus attempting to put an end to the most glorious jewel in the Church’s liturgical crown: The Traditional Roman Mass (with its Roman Canon), which, in essence – as Paul VI himself admitted – goes back, at least, to St. Gregory the Great.
The false doctrinal and spiritual “riches” he claimed would come from the innovations based on “ancient liturgical sources” never materialized. Under the pretense of going back to ancient and primitive practices, the immemorial sacred Roman Canon was mangled and replaced with other “Eucharistic prayers” that no Apostle or Church Father had ever prayed!
The Roman Mass that had been used for centuries in Latin in a unified manner for greater “purity of worship” was forcefully replaced with something that represented “both as a whole and in its details, a striking departure from the Catholic theology of the Mass,” as had been solemnly established by the Council of Trent.
As Paul VI himself admitted, “The introduction of the vernacular will certainly be a great sacrifice for those who know the beauty, the power and the expressive sacrality of Latin. We are parting with the speech of the Christian centuries, we are becoming like profane intruders in the literary preserve of sacred utterance. We will lose a great part of that stupendous and incomparable artistic and spiritual thing, Gregorian chant.”
Well, wasn’t he right about the sacrifice part! But he was clearly wrong about the supposed benefits the use of the vernacular would bring. It is widely known that the Anglican church had the most beautiful English for its liturgy, but it is also widely known that it was useless because it was done before empty pews in comparison with the Catholic Church that had churches full of people devoutly praying the Mass in Latin!
Because of Paul VI’s decision to deprive the Church of her immemorial rites, ceremonies, and language, generations of Catholics have helplessly undergone the violent profanation of all that the Christian centuries held supremely sacred. Catholic Worship was rendered unrecognizable by a militant and pernicious anti-Roman spirit, as well as by incredible abuses of every kind and in every sector.
The changes were a triumph for a protestantized mentality that would have made Luther himself proud. It took the innovators and progressives less time and effort than it took Protestants to savagely tear, violently sever, and mercilessly mangle the sacred unity of the one seamless garment – the Catholic Church.  They chose to “divide and conquer” (divide et impera) in vehement opposition to Our Lord’s prayer “that they may be one” (ut unum sint).
YET, almost 40 years after Paul VI’s violent attempt to destroy Catholic Worship, the traditional Roman Mass made a triumphant return: The Catholic world was officially told that the immemorial Roman Mass was never abrogated, and that there were requests for its greater use not only by people who grew up with it, but also by young persons who “have discovered this liturgical form, felt its attraction and found in it a form of encounter with the Mystery of the Most Holy Eucharist, particularly suited to them.”
The liturgical Reconquista has gone on in many places because it is realized that it was THE Roman Mass, for which Martyrs died, for which the Church was persecuted and shed tears of blood, that gave the faithful immeasurable treasures of piety and devotion and built a universal Christian civilization that no other religion or form of worship could accomplish.
As Tito Casini said in The Severed Tunic: “Armed with faith, we fight and we will fight, for Israel and within Israel, for the Church and within the Church, mindful of those words ‘non veni pacem mittere sed gladium,’ offering to God even this our pain in having to go to war against ‘enemies’ who are our beloved brethren, laymen, like us, or clerics.”
And this is done with the realization that “our Mass goes back, without essential change, to the age when it first developed out of the oldest liturgy of all. It is still redolent of that liturgy, of the days when Cæsar ruled the world and thought he could stamp out the faith of Christ, when our fathers met together before dawn and sang a hymn to Christ as to a God. The final result of our enquiry is that, in spite of unsolved problems, in spite of later changes, there is not in Christendom another rite so venerable as ours.” ~Fr. Adrian Fortescue
Posted by latinmass1983 at 11:51 AM