Consecration of a Catholic Church

THE CONSECRATION OF A CATHOLIC CHURCH 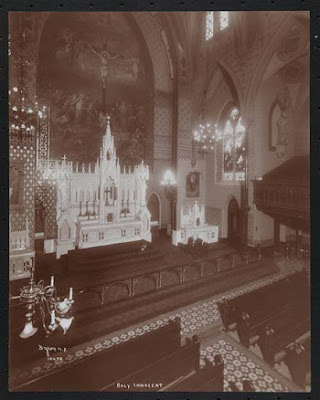 Holy Innocents Church in NYC in 1901 - the year of its consecration.
*

*
The consecration of a Catholic church is a very solemn and impressive ceremony, with rites that devote the edifice exclusively to sacred use. The various parts of the traditional ceremonies of consecration are of very ancient date, and are substantially the same today as they were many centuries ago.
*

*
As formally decreed by the Council of Trent, Holy Mass is not to be celebrated in any place except a consecrated or blessed church, which is why the Church wants that cathedrals and parish churches be solemnly consecrated, and that smaller churches be blessed. The consecration of a church is reserved to a bishop, by which the church is dedicated  to the service of God, thereby raising it perpetually to a higher order, removing it from the malign influence of Satan, and rendering it a place in which favors are more graciously granted by God (Pontificale Romanum).
*

*
As part of the consecration of a church, at least one fixed altar must be consecrated. According to the Catholic Encylopedia (1913), before the time of Constantine, the consecration of churches was a private matter due to persecutions. However, after Constantine’s conversion, it became a public rite: “After these things a spectacle earnestly prayed for and much desired by us all appeared, viz. the solemnization of the festival of the dedication of churches throughout every city, and the consecration of newly-built oratories” (Eusebius of Cæsarea, Church History X).
The consecration of churches is believed to be, in a sense, a continuation of the Jewish rites instituted by King Solomon. Some authors date the rites to around the year 105 and attribute its origin to Pope St. Evaristus, but it seems probable that he merely promulgated as a law what had been the custom before his time. There are many examples to prove that churches were consecrated before peace had been granted to the Church, such as the one taken from the life of St. Cecilia, who prayed for a cessation from hostilities against the Christians so that her home might be consecrated as a church by St. Urban I (222-230). Another example is taken from the life of St. Marcellus (308-309), who consecrated a church in the home of St. Lucina (Breviarium Romanum, 16 January).
* 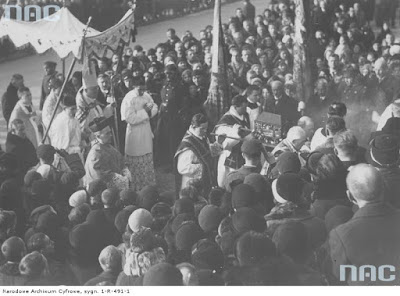 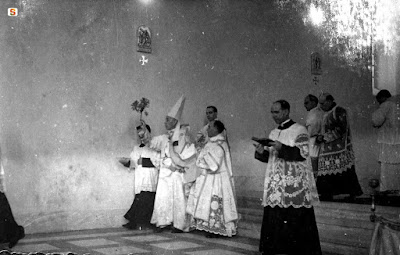 *
On the day of consecration, the candles under the crosses on the walls are lighted. After this, the bishop and the clergy go to the place in which the relics of the martyrs were deposited the evening before. Whilst the bishop is being vested, the Seven Penitential Psalms are recited, after which all proceed to the main entrance of the church, where, remaining outside, the bishop blesses the water. The bishop then goes three times around the outside of the church, the first time sprinkling the upper part of the walls, the second time the lower part, and the third time on a level with his face.
* 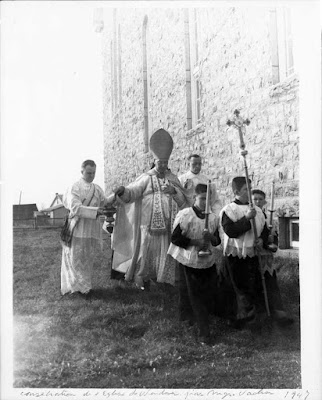 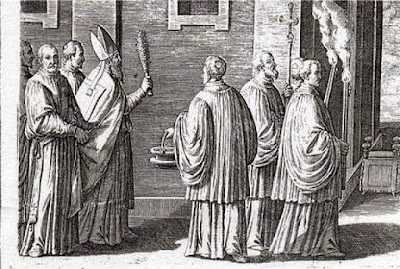 *
After each round, the bishop strikes the door with the base of his crosier and says, “Lift up your gates, ye princes, and be ye lifted up, ye everlasting doors, and the King of Glory shall come in.” Every time the deacon inside the church asks, “Who is this King of Glory?” and the bishop twice answers, “The Lord, strong and mighty; the Lord mighty in battle;” and the third time he says, “The Lord of Armies, He is the King of Glory.” According to Blessed Yves of Chartres in his Sermo de Sacramentis, this triple sprinkling and circuit of the walls symbolizes the triple immersion at holy baptism, the consecration of the soul as the spiritual temple of God.
* 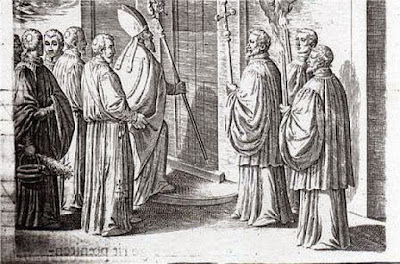 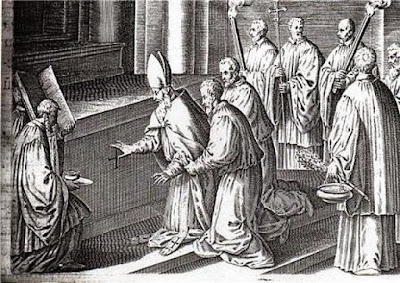 *
The essence of the consecration of a church consists in the anointing of the (12) twelve crosses on the inner walls with the form: “Sancificetur et consecretur hoc templum,” etc. According to a decree of the Sacred Congregation of Rites dated April 12, 1614, if before this ceremony the consecrator should become incapacitated for finishing the function, the whole rite must be repeated from the beginning. These crosses are not to be of wood or of any fragile material. They must never be removed (Cong. Sac. Rit., 18 February, 1696), and documents failing, they serve to prove that the church has been consecrated. Under each cross a bracket holding a candle is affixed.
* 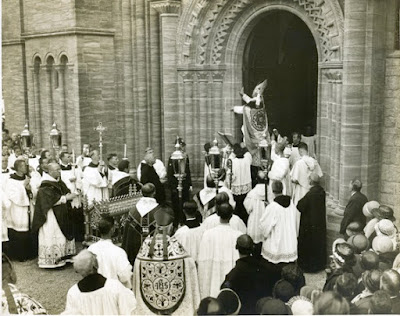 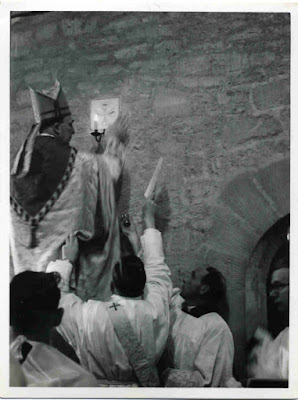 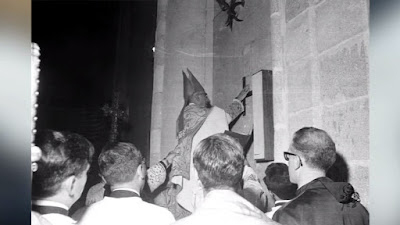 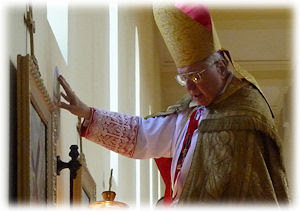 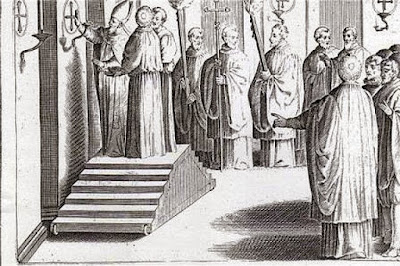 *
“Such are the impressive ceremonies which our Church uses for the sanctifying of a temple of God. It is sprinkled, within and without, with holy water; the door and walls are signed with blessed Chrism, the altar is anointed with the same oil, and is made a tomb of one of God’s illustrious servants. The odor of incense fills the house of God, and the solemn prayers of the Church are used to consecrate both temple and altar to His service forever. ‘This is none other than the House of God and the Gate of Heaven” (The Externals of the Catholic Church, Rev. John Sullivan).
* 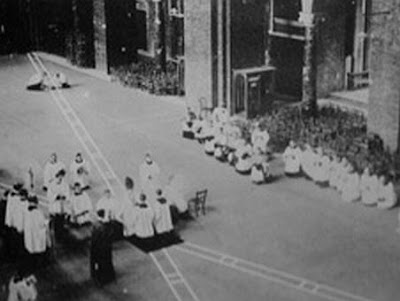 Tracing of the letters of the Alphabet in Latin and Greek letters on sand on the floor of the church.
* 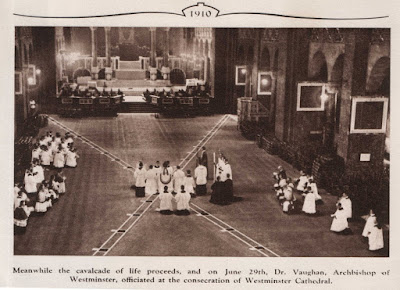 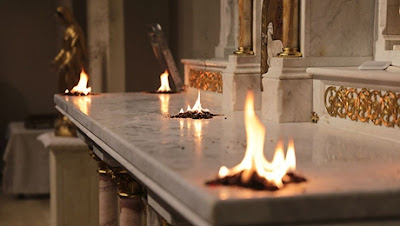 Incense being burned on the five corses on the mensa of the Altar(s).
* 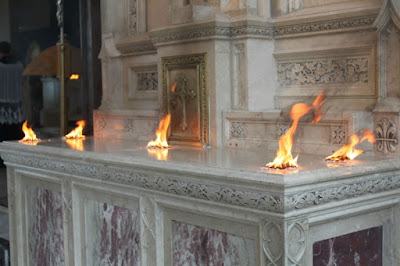