The Invocation of Saints

A CONCISE EXPOSITION OF THE TENETS OF THE CATHOLIC CHURCH, CONCERNING THE INVOCATION OF SAINTS. 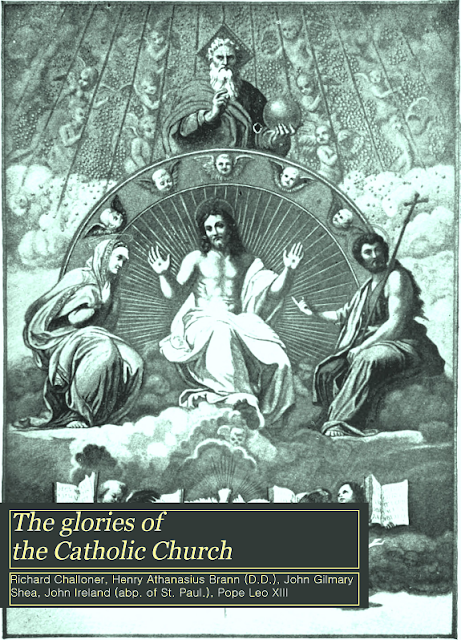 THE doctrine of the Catholic Church with respect to the honor which is due to the Saints, and especially to the blessed Virgin, is founded on the most obvious principles of reason; and expressly sanctioned by numerous and explicit warrants of Scripture.

We are inclined, by the impulse of nature, to be pleased with objects that are beautiful, and the best feelings of the human heart prompt us to do homage to goodness and virtue. Those feelings are in perfect accordance with the principles of right reason, for it cannot be wrong to admire excellence nor unreasonable to esteem what is worthy of veneration. God commands us to "render to all men their dues, tribute to whom tribute is due, custom to whom custom, fear to whom fear, and honor to whom honor" (Rom. xiii. 7), and thus expressly sanctions our doing homage to the exalted dignity and transcendent splendor of His servants in heaven, who, "having overcome, are clothed in white, and walk with Him because they are worthy" (Rev. iii. 4). Jesus Christ declares that to those "that shall overcome, He will give to sit with Him on His throne" (Rev. iii. 21), "and they shall be like to the angels of God in heaven" (Matt. xxii. 30), "and shine like the sun in the kingdom of their Father" (Matt. xiii. 43); that "they shall see God face to face" (1 Cor. xiii. 12); "and beholding the glory of the Lord with open face, they are transformed into the same image, from glory to glory, by the spirit of the Lord" (2 Cor. iii. 18), "and they shall reign for ever and ever" (Rev. xxi.-xxii. 5).

Such is the dignity which the Lord God confers upon His servants. He exalts them to a fellowship with Himself, and makes them partakers of His throne and glory. It is an imperative duty, therefore, to honor the Saints, and in doing so we follow the example of God Himself.

But while the dignity of the Saints claims our respectful homage, their ardent charity demands the warmest affection of our hearts. Seeing God face to face, they cannot cease to love Him, and loving Him, they must also love all the members of His mystical body here on earth, and earnestly desire their eternal happiness; for "there is joy before the angels of God upon one sinner doing penance" (Luke xv. 10). It is therefore a portion of the happiness as well as of the duty of the Saints to pray to God for their brethren on earth. "And the four living creatures, and the four and twenty ancients fell down before the Lamb, having every one of them harps and golden vials full of odors which are the prayers of the saints" (Rev. v. 8); "and another angel came and stood before the altar, having a golden censer, and there was given to him much incense, that he should offer the prayer of all the Saints upon the golden altar, which is before the throne of God. And the smoke of the incense of the prayers of the Saints ascended up before God, from the hand of the angel" (Rev. viii. 3). And the angel Raphael speaks as follows to holy Tobias: "when thou didst pray with tears, and didst bury the dead, and didst leave thy dinner, and hide the dead by day in thy house, and bury them by night, I offered thy prayers to the Lord" (Tob. xii. 12); and in Zach. i. 12 we read that "the angel of the Lord answered and said, O Lord of hosts, how long wilt thou not have mercy on Jerusalem; and on the cities of Juda with which thou hast been angry? This is now the seventh year: and the Lord answered the angel, that spoke in me, good words, comfortable words."

Here, then, is evidence that the angels and Saints offer up their prayers to the throne of grace on behalf of their brethren on earth and that God responds to them "good words, comfortable words." It is absurd, therefore, to deny that it is lawful to ask for the prayers of the blessed in heaven. Such prayers are evidently agreeable to God, and must be profitable to man. For as "the Lord accepted the face of Job" (xlii. 8), who was still in this state of probation, how much more the face of those who "have proved themselves worthy;" "who are made to their God a kingdom and priests" (Rev. v. 10); "who shall judge nations and rule over people" (Wisd. iii. 8), "and shall reign upon the earth" (Rev. v. 10).

In conformity with the evidence of the foregoing, and numerous other express warrants of Holy Writ, the Catholic Church teaches that "The Saints who reign with Christ offer up their prayers to God for men, and that it is useful and good to invoke them, and to have recourse to their prayers, help and assistance, in order to obtain blessings from God, through His Son, Jesus Christ our Lord, Who alone is our Redeemer and Saviour" (Conc. Trid., Sess. 25). In the catechism of the Council of Trent, the infinite difference between the worship which is due to God, and the honor which, on His account, may be given to the Saints, is so strongly marked and so fully and clearly explained as to obviate all the cavils raised against Catholics on that subject. A Catholic child, acquainted with the first outlines of the Christian doctrine, will commit no mistake on that point; and the most rude peasant in the most remote part of Ireland, is quite aware that it would be idolatry to give to the Saints the honor which he owes to God, from Whom alone he hopes for mercy, while he looks for nothing from the saints but the assistance of their prayers; and hence it is that he always concludes his supplication to the Saints with the words, "through our Lord and Saviour Jesus Christ."

Catholics in every age of the Church had a special devotion to the blessed Virgin. They venerated her more than the other Saints, because her sanctity was far superior to theirs. They believed her to be full of grace and blessed among women, and to hold a relation to God, as the Mother of Jesus Christ, to which no other creature could lay claim. They have recourse to her intercession, therefore, with the utmost confidence; knowing that her divine Son was obedient to her here on earth, and that, in His last agony on the cross, He committed the children of His Church to her care in the person of St. John, His beloved disciple.

But, notwithstanding the profound veneration in which Catholics hold the blessed Virgin, and the precedence which they justly give her above all God's creatures, they limit their respect within proper bounds, and stop infinitely short of paying her that honor which is due to God, and which it would be idolatry to give to any other being. To God they offer supreme homage as the great creator and preserver of the universe. They adore, honor and love Him for His own sake, and on account of His own innate perfections. From Him they ask for grace and mercy, and deliverance from spiritual and temporal evils, because He alone is omnipotent—He alone can forgive and relieve them. From the blessed Virgin, however, they expect no more than her intercession, and the homage which they pay her is for the sake of God, is directed through her to God, and ultimately terminates in God.

Whatever, therefore, may be the terms used by Catholic writers, or in Catholic books of devotion, relative to the blessed Virgin, they are all to be understood as limited to the genuine sense of the Catholic doctrine; no language, however strong or metaphorical, must be supposed—for it is not meant—to confer upon her any attribute or privilege which is peculiar to God. If she is invoked to "assist, defend, deliver us," etc., it is always understood by her prayers and intercession; and if she be styled “the hope of sinners, the mediatrix, the refuge of the afflicted, the help of Christians, the merciful, the all-powerful Virgin," all those terms are to be understood in the same limited sense, and to mean no more than that God, in His infinite goodness and mercy, is ever willing to grant her petitions.

The holy fathers and other spiritual writers seem to have exhausted the powers of language in celebrating the virtues of this august Virgin Mother of God; and, full of tender devotion toward her, they have sometimes used expressions so strong and metaphorical that the enemies of Catholicity, either from ignorance of its real principles, or through invidious motives, have imputed doctrines on this subject to Catholics which they abhor and utterly disavow; and as the little book now presented to the public was principally compiled by its venerable author from the writings of the saints and the holy fathers, it has been considered prudent to prefix the foregoing observations, in order that the enemies of the blessed Mother of God may not affect to discover new grounds for calumny and invective.

In conclusion, it may not be amiss to observe, that the reasonableness of the Catholic doctrine with respect to the invocation of Saints is so obvious and accords so fully with the whole tenor of the Scriptures, and the constant belief of the primitive Church, that very many learned Protestants have acknowledged it. Bishop Montague writes as follows in his Antidote, page 20: "I do not deny but the Saints are mediators, as they are called, of prayer and intercession. They interpose with God by their supplications, and mediate by their prayers." And again, in his Treatise on the Invocation of Saints, page 118, he says: "I see no absurdity in nature, no incongruity unto analogy of faith, no repugnancy at all to sacred Scripture, much less impiety for any man to say, as they of the Roman Church do, 'Holy Mary, pray for me;'" and he adds, "Indeed, I grant Christ is not wronged in His mediation by such invocation of the saints, and this," he continues, "is the common voice with general concurrence, without contradiction, of reverend and learned antiquity, for aught I ever could read or understand, and I see no reason or cause to depart from them, touching intercession in this kind" (Invocation of Saints, page 103).