ON THE COLUMBUS QUADRICENTENNIAL
* 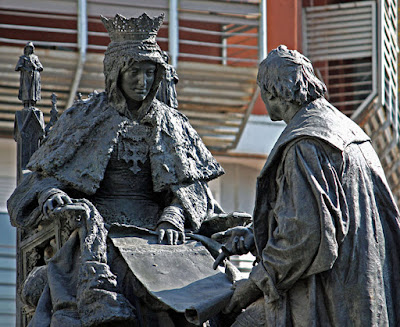 Isabella the Catholic and Christopher Columbus
*
To Our Venerable Brethren, the Archbishops and Bishops of Spain, Italy, and the two Americas.

Now that four centuries have sped since a Ligurian first, under God’s guidance, touched shores unknown beyond the Atlantic, the whole world is eager to celebrate the memory of the event, and glorify its author. Nor could a worthier reason be found where through zeal should be kindled. For the exploit is in itself the highest and grandest which any age has ever seen accomplished by man; and he who achieved it, for the greatness of his mind and heart, can be compared to but few in the history of humanity.
By his toil another world emerged from the unsearched bosom of the ocean: hundreds of thousands of mortals have, from a state of blindness, been raised to the common level of the human race, reclaimed from savagery to gentleness and humanity; and, greatest of all, by the acquisition of those blessings of which Jesus Christ is the author, they have been recalled from destruction to eternal life. …

Therefore, amidst so lavish a display of honor, so unanimous a tribute of congratulations, it is fitting that the Church should not be altogether silent; since She, by custom and precedent, willingly approves and endeavors to forward whatsoever She see, and wherever She see it, that is honorable and praiseworthy. It is true She reserves Her special and greatest honors for virtues that most signally proclaim a high morality, for these are directly associated with the salvation of souls; but She does not, therefore, despise or lightly estimate virtues of other kinds.

But there is, besides, another reason, a unique one, why We consider that this immortal achievement should be recalled by Us with memorial words. For Columbus is ours; since if a little consideration be given to the particular reason of his design in exploring the “mare tenebrosum,” and also the manner in which he endeavored to execute the design, it is indubitable that the Catholic faith was the strongest motive for the inception and prosecution of the design; so that for this reason also the whole human race owes not a little to the Church. … He was distinguished by this unique note, that in his work of traversing and re-traversing immense tracts of ocean, he looked for a something greater and higher than did these others [explorers].
* 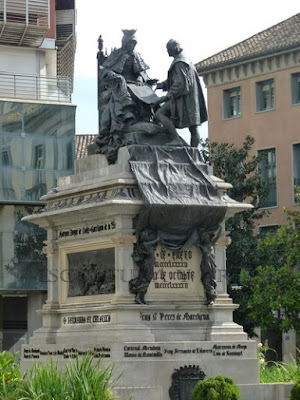 *
We say not that he was unmoved by perfectly honorable aspirations after knowledge, and deserving well of human society; nor did he despise glory, which is a most engrossing ideal to great souls; nor did he altogether scorn a hope of advantages to himself; but to him far before all these human considerations was the consideration of his ancient faith, which questionless dowered him with strength of mind and will, and often strengthened and consoled him in the midst of the greatest difficulties. This view and aim is known to have possessed his mind above all; namely, to open a way for the Gospel over new lands and seas. Columbus certainly had joined to the study of nature the study of religion, and had trained his mind on the teachings that well up from the most intimate depths of the Catholic faith. For this reason, when he learned from the lessons of astronomy and the record of the ancients, that there were great tracts of land lying towards the West, beyond the limits of the known world, lands hitherto explored by no man, he saw in spirit a mighty multitude, cloaked in miserable darkness, given over to evil rites, and the superstitious worship of vain gods.

Miserable it is to live in a barbarous state and with savage manners: but more miserable to lack the knowledge of that which is highest, and to dwell in ignorance of the one true God. Considering these things, therefore, in his mind, he sought first of all to extend the Christian name and the benefits of Christian charity to the West, as is abundantly proved by the history of the whole undertaking. For when he first petitioned Ferdinand and Isabella, the Sovereigns of Spain, for fear lest they should be reluctant to encourage the undertaking, he clearly explained its object: “That their glory would grow to immortality, if they resolved to carry the name and doctrine of Jesus Christ into regions so distant.” And in no long time having obtained his desires, he bears witness: “That he implores of God that, through His Divine aid and grace, the Sovereigns may continue steadfast in their desire to fill these new missionary shores with the truths of the Gospel.” He hastens to seek missionaries from Pope Alexander VI, through a letter in which this sentence occurs: “I trust that, by God’s help, I may spread the Holy Name and Gospel of Jesus Christ as widely as may be.” He was carried away, as we think, with joy, when on his first return from the Indies he wrote to Raphael Sanchez: “That to God should be rendered immortal thanks, Who had brought his labors such prosperous issues; that Jesus Christ rejoices and triumphs on earth no less than in Heaven, at the approaching salvation of nations innumerable, who were before hastening to destruction.”

And if he moved Ferdinand and Isabella to decree that only Catholic Christians should be suffered to approach the New World and trade with the natives, he brought forward as reason, “that he sought nothing from his enterprise and endeavor but the increase and glory of the Christian religion.” And this was well known to Isabella, who better than any had understood the great man’s mind; indeed it is evident that it had been clearly laid before that most pious, masculine-minded, and great-souled woman. For she had declared of Columbus that he would boldly thrust himself upon the vast ocean, “to achieve a most signal thing, for the sake of the Divine glory.” And to Columbus himself, on his second return, she writes: “That the expenses she had incurred, and was about to incur, for the Indian expeditions, had been well bestowed; for thence would ensure a spreading of Catholicism.”
* 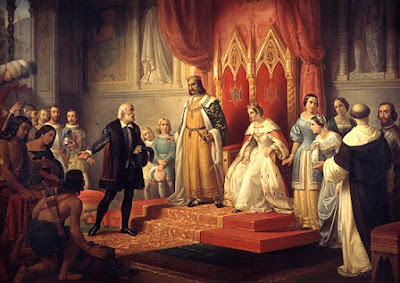 *
In truth, except for a Divine cause, whence was he to draw constancy and strength of mind to bear those sufferings that to the last he was obliged to endure? We allude to the adverse opinions of the learned, the rebuffs of the great, the storms of a raging ocean, and those assiduous vigils by which he more than once lost the use of his sight. Then in addition were fights with savages, the infidelity of friends and companions, criminal conspiracies, the perfidy of the envious, and the calumnies of detractors. … Columbus threw open America at the time when a great storm was about to break over the Church. As far, therefore, as it is lawful for man to divine from events the ways of Divine Providence, he seemed to have truly been born, by a singular provision of God, to remedy those losses, which were awaiting the Catholic Church on the side of Europe [Martin Luther’s protestant revolt].
* 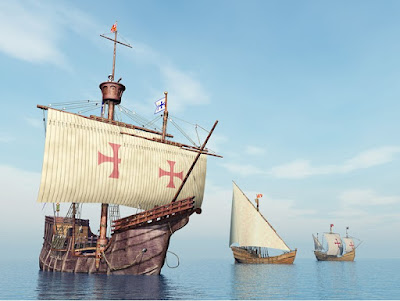 *
Columbus resolved to go before and prepare the ways for the Gospel, and, deeply absorbed in this idea, gave all his energies to it, attempting hardly anything without religion for his guide and piety for his companion. We mention what is indeed well known, but is also characteristic of the man’s mind and soul. For being compelled by the Portuguese and Genoese to leave his object unachieved, when he had reached Spain, within the wall of a Religious house he matured his great design of meditated exploration, having for confidant and adviser a Religious — a disciple of Francis of Assisi. Being at length about to depart for the sea, he attended to all that which concerned the welfare of his soul on the eve of his enterprise.

He implored the Queen of Heaven to assist his efforts and direct his course; and he ordered that no sail should be hoisted until the Name of the Trinity had been invoked. … The very names he gave to the newly discovered islands tell the purposes of the man. At each disembarkation, he offered up prayers to Almighty God, nor did he take possession save “in the Name of Jesus Christ.” Upon whatsoever shores he might be driven, his first act was to set upon the shore the standard of the holy Cross: and the name of the Divine Redeemer, which he had so often sung on the open sea to the sound of the murmuring waves, he conferred upon the new islands. Thus at Hispaniola he began to build from the ruins of the temple, and all popular celebrations were preceded by the most sacred ceremonies.
* 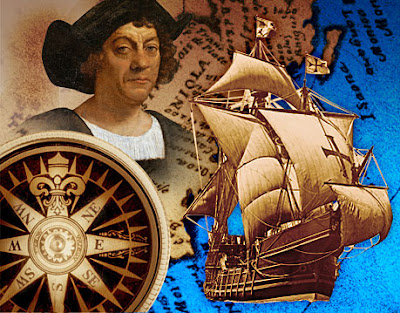 *
This, then, was the object, this the end Columbus had in view in traversing such a vast extent of land and water to discover those countries hitherto uncultivated and inaccessible, but which, afterwards, as we have seen, have made such rapid strides in civilization and wealth and fame. And in truth the magnitude of the undertaking, as well as the importance and variety of the benefits that arose from it, call for some fitting and honorable commemoration of it among men. And, above all, it is fitting that we should confess and celebrate in an especial manner the will and designs of the Eternal Wisdom, under Whose guidance the discoverer of the New World placed himself with a devotion so touching.
* 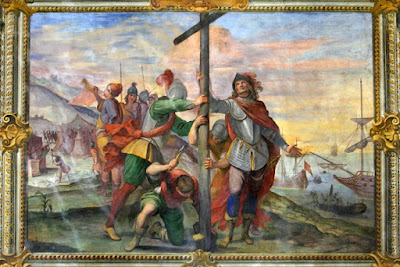 *
We decree, therefore, that on October 12, or on the following Sunday, if the Ordinary should prefer it, in all the Cathedral churches and convent chapels throughout Spain, Italy, and the two Americas, after the office of the day there shall be celebrated a Solemn Mass of the Most Holy Trinity. Moreover, besides the above mentioned countries, We feel assured that the other nations, prompted to it by the counsel of their bishops will likewise join in the celebration, since it is fitting that an event from which all have derived benefit should be piously and gratefully commemorated by all.
* 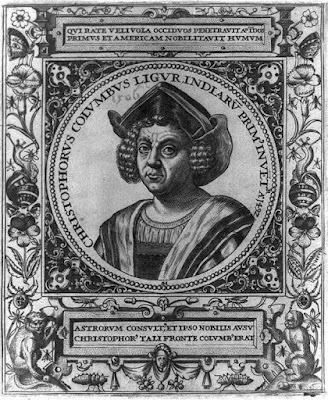 *
Meanwhile, as a pledge of heavenly favors and of Our own paternal goodwill, we lovingly bestow the Apostolic Benediction in Our Lord upon you, Venerable Brethren, and upon your clergy and people.