The Sacrament of Penance

THE SACRAMENT OF PENANCE 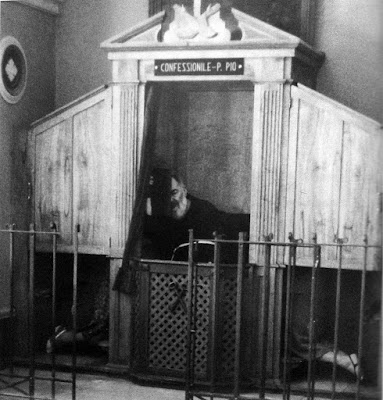 MAN, even though regenerated and justified, is still liable to fall into sin, on account of the depravity of his fallen nature, and also on account of the many temptations that surround him: therefore our loving Lord, in His infinite mercy, instituted another sacrament for the forgiveness of sin committed after baptism.


This is the sacrament of penance, in which, by the absolution of the priest, joined with the contrition, confession, and satisfaction of the penitent, the sins of the penitent are forgiven by God, through the application of the merits of Jesus Christ, and a grace is given him to help him to avoid sin in future. 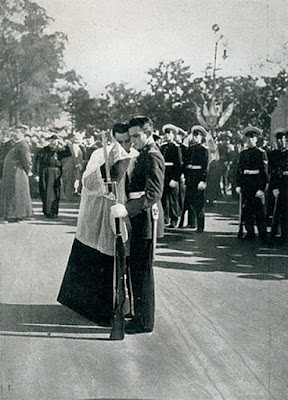 Contrition is an interior grief, horror and detestation of sin committed, with the firm resolve never more to relapse into our evil habits.[1] Contrition thus includes in itself two acts: sorrow of the heart for sin committed, and the purpose of the will to avoid sin in future.


Confession is an express, contrite, but secret self-accusation, to a duly authorized priest, of at least all grievous sins committed after baptism, of which he wishes to receive absolution, or of all the mortal sins committed since the last confession when absolution was received, as far as we can recall them to our memory.[2]


Satisfaction means doing the penance enjoined by the priest in confession, repairing the scandal if any was given, and restoring the property and good name to our neighbor in case of his having been injured by us.

Almighty God certainly can, if it so pleases Him, depute a man to forgive sins in His name. That He did depute certain men to forgive sins is plain from what our blessed Lord said to His Apostles, and in the persons of the Apostles to their legitimate successors to the end of the world: “Peace be to you. As the Father hath sent me, I also send you. When He had said this, He breathed on them; and He said to them: Receive ye the Holy Ghost: whose sins you shall forgive, they are forgiven them; and whose sins you shall retain, they are retained” (St. John xx. 21-23).

This divine commission to forgive sins in Christ’s name was always understood to mean what the words just quoted from St. John naturally and plainly signify; namely, that God has commissioned certain men to grant, and also withhold, the forgiveness of sin in His name; and these words have thus been understood from the time of the Apostles until now by the Catholic Church, and have thus been understood also by the separated Greek and other Oriental schismatical churches, in which the sacrament of penance is also believed and practised.

It is of course always God Who forgives when forgiveness is granted through the instrumentality or ministration of a priest who acts as minister of God. As in holy baptism, it is God who forgives, yet it is done through the medium of the minister who dispenses that sacrament of regeneration, for whether it be Paul or Cephas who baptizes, it is always Jesus Christ Who baptizes; so in the sacrament of penance, when the priest forgives, it is God Who forgives through His appointed authorized minister. From the words of St. John, lately quoted, it is evident that the priest has, by the commission of Christ, sometimes to forgive, and sometimes to retain, that is, to withhold forgiveness of sin; therefore it is necessary that the penitent sinner should make known to the priest in confession the state of his conscience, in order that the priest may give or withhold absolution with knowledge and prudence, and not grant or deny it unduly or at hazard, which Jesus Christ never intended.

The priest, in fact, who is called upon to dispense the sacrament of penance, to remit or to retain sin, has to decide whether the person who comes to him as a penitent is really guilty of sin or not; whether, if guilty, the sin is grievous or is venial; whether reparation to a neighbor is required or not ; he must see what instruction, admonition, advice, or penance he has to give him; he must form a well-grounded judgment whether the penitent has or has not the dispositions which render him fit to receive absolution. In short, the priest in the tribunal of penance is a judge, and as such he must, as a rule, have full knowledge of the case upon which he has to pronounce judgment; and this knowledge he can only have from the confession of the penitent person.

That it is a good thing to confess our sins appears from the following passages of Holy Writ: “He that hideth his sins shall not prosper; but he that shall confess, and forsake them, shall obtain mercy” (Proverbs xxviii. 13). St. James writes: “Confess, therefore, your sins one to another” (v. 16). If open confession is good for the soul, how much more advantageous is it to confess to a priest who has deputed power from God to forgive our sins.

We must bear the shame of showing our wounds and bruises, and festering sores, if we wish to be cured. To humble ourselves before the minister of God is some reparation for the evil we have done; that humiliation pleases God and procures for us many great blessings.
_________________________
[1] See Council of Trent, Session xiv. Chap. 4.
[2] † See Method of Confession, Part II. No. 6 of this book.
TAKEN FROM THE GLORIES OF THE CATHOLIC CHURCH (VOLUME 1). 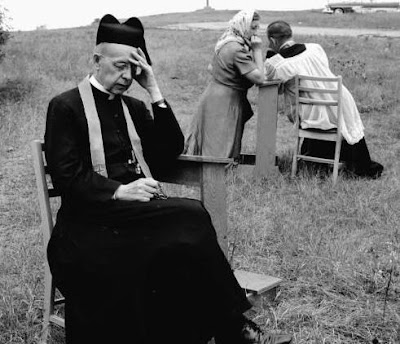 *
In the four pictures below, one can see the "virgula pœnitentiaria" that was abolished in April of 1967 under the Pontificate of (who else?) Pope Paul VI. 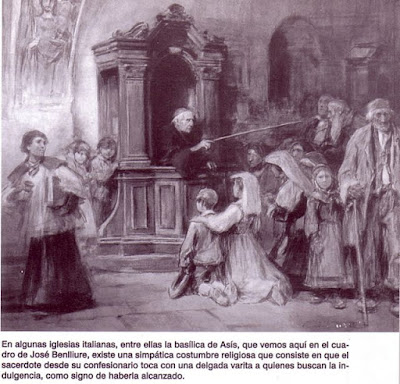 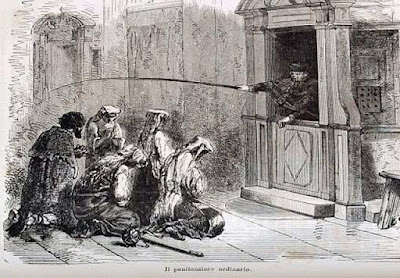 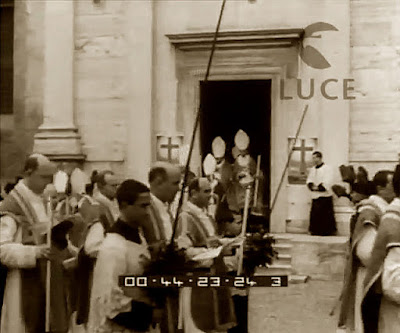 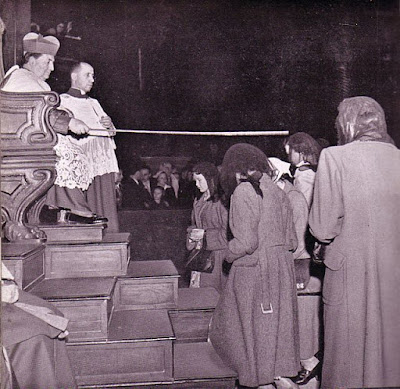 Above and below, Cardinal Canali in 1950, with the "virgula pœnitentiaria."
*
﻿ 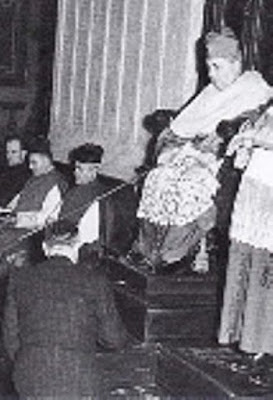